Arunachal gets golden opportunity to showcase its diverse culture through G20 meet: Speaker

Sona expressed his happiness over the decision of PM Modi of conducting G20 meetings throughout the country in a Pan India mode which will give a glance of different cultures, traditions to the visiting foreign and domestic delegates. 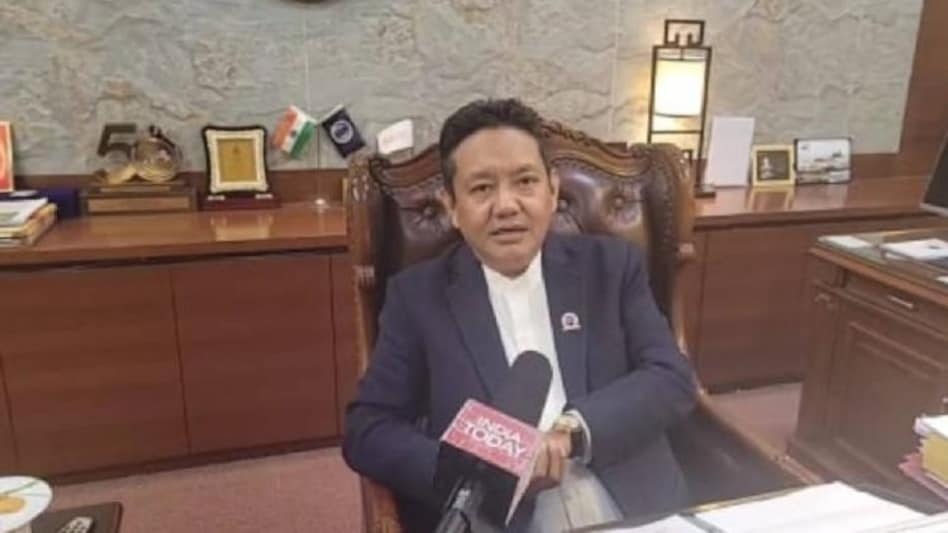 Speaker of Arunachal Pradesh Legislative Assembly P.D Sona talking exclusively to India Today NE briefed about the G20 meeting that is going to be held in Itanagar for two days on 24th and 25th March 2023 respectively.

Sona expressed his happiness over the decision of PM Modi of conducting G20 meetings throughout the country in a Pan India mode which will give a glance of different cultures, traditions to the visiting foreign and domestic delegates.

"Arunachal being an integral part of the country will get a Golden opportunity to showcase its diverse culture, tourism aspects and other potential to the outer world through this G20 meet’’.

Regarding the delegates, the Speaker informed that the registration of delegates has been started now and as per tentative information 60 foreign and 50 domestic Indian delegates will attend this G20 Meet. Preparations is going on and there will be a close door G20 meeting in banquet hall,Itanagar and  other meetings will include programs like cultural display,events.

Regarding the delimitation demands coming from various sections of society Speaker Sona stated that Delimitation will be the exercise of the Election Commission, Government of India and it is mainly  a Central subject and Government of Arunachal can just give the feedback to the commission and there is a certain laid  formula to go for delimitation and if things fit in frame according to formula designed by the commission it will be granted wherever necessary.

According to Speaker Sona,  Arunachal Pradesh Legislative Assembly hall is designed with a very futuristic view in mind to accumulate increased number of Members with more seating capacity & all the facilities to cater their needs.

Regarding the non celebration of famous  Tourism festival” Adventure at Mechuka’’, Speaker Sona cited non allocation of funds by Tourism department after Covid pandemic and removal of it as a calender event. Secondly due to commence of road construction in Shi Yomi district i.e double laning from Tato to Mechuka and Tato to Pene (Starting point of Shi Yomi) the commuters are facing difficulties to travel upto Mechuka & this hampers the tourist inflow which has been witnessed by the Speaker who is also local MLA from Mechuka -Tato assembly constituency on his last visit.

” Homestay owners, shopkeepers ,hotel owners of Shi Yomi district admitted the tourist footfall which resulted in the decline of economic activities & due to this ongoing road construction which is inevitable but temporary this trouble is bound to happen and after completion it will be a boon for locals along with personals from Defence forces’’ speaker added.

According to Speaker Pasang Dorjee Sona who is also the local MLA of Mechuka-Tato of Shi Yomi district  bordering Indo China Border, Mechuka will soon will get 4g network for which telecom companies Airtel,Bsnl are doing their job round o clock & apart from this, a pilot project which include air fibre connectivity is also started and for this towers are being erected by bsnl which will result in early establishment of 4g service in Mechuka. ‘’ If this pilot project works out then Government of Arunachal will think of replicating it to other places where there is no telecom and internet connectivity” Speaker added.

Regarding the BADP Border Area Development Program scheme Speaker Sona informed that earlier it used to be a Blockwise allocation for the border area developments but now the Government of India has taken new decision of making it a kind of composite comprehensive kind of project that would be like developing the border areas as a model village and this is in pipeline and very soon Arunachal Government will get a positive input on that and Government is hopeful that this new plan and the policies of developing border areas as a model border village and it will really help a purpose.Regarding the establishment of college in interior places of Shi Yomi district Speaker cited less enrollment of students and stated it as a prerogative of the education department.