Chowna Mein, the deputy chief minister of Arunachal Pradesh flagged off the return leg of Indigo's inaugural commercial flight from Donyi-Polo Airport to Kolkata and Mumbai. 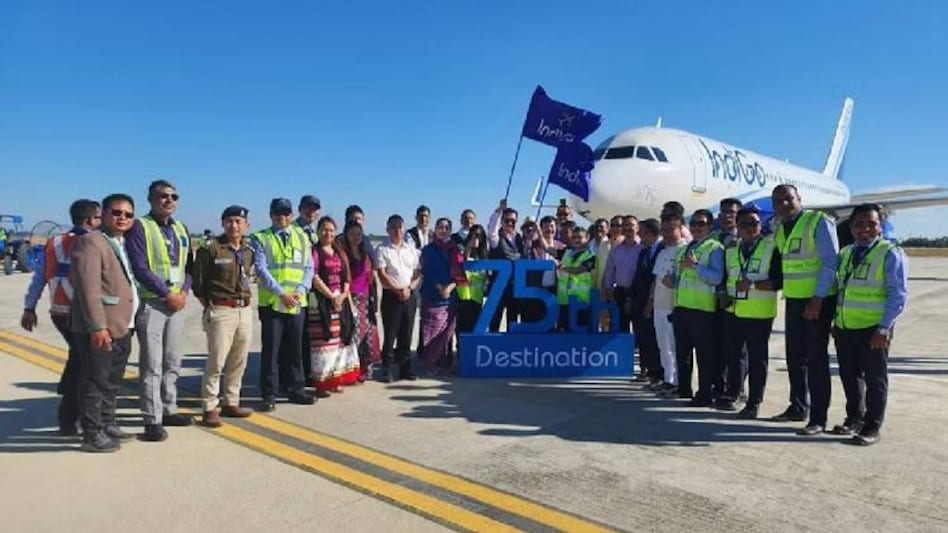 Chowna Mein, the deputy chief minister of Arunachal Pradesh flagged off the return leg of Indigo's inaugural commercial flight from Donyi-Polo Airport to Kolkata and Mumbai.

Mein referred to the event as a significant chapter for Arunachal Pradesh.

He said, “it is the beginning of a new chapter in Civil Aviation History of Arunachal Pradesh as from today onwards we are going to have direct air-connectivity from Donyi-Polo Airport, Itanagar to Kolkata, Mumbai and other metro cities across the country”.

He further added, “It is a very proud moment for the people of Arunachal Pradesh and extend his gratitude to Indigo Airlines, one of the largest and best commercial flight operators in the country for choosing to operate from Donyi Polo Airport, Itanagar”.

Mein highlighted the development of civil aviation in the State by stating that nine formerly non-operational airstrips were located in Ziro, Aalo (Along), Pasighat, Tuting, Mechuka, Walong, Vijaynagar, Tawang, and Daporijo. The first greenfield airport built in the State was Donyi-polo Airport in Itanagar, which was opened by Prime Minister Narendra Modi on November 19 after three Advanced Landing Grounds at Pasighat, Tezu, and Ziro were rendered operational after the Prime Minister Narendra Modi assumed office.

He added that nine airports were created in the northeast region over the course of seven decades, from 1947 to 2014, compared to seven airports established under the current government at the centre in the previous seven years since 2014.

He announced that Indigo, which has 75 destinations nationwide, will launch a direct service to Mumbai through Kolkata with connections to several major towns. Additionally, in cooperation with Turkish Airlines, Indigo offers connecting flights to international locations in South East Asian nations, Bangkok, Singapore, Hanoi (Vietnam), and to Europe via Istanbul.

He added that it will open the door for simple, quick communication, which will help not only frequent travellers and members of the business class but also regular citizens, patients, and students.

By making the State more accessible to the populace, it will significantly boost tourism and create new prospects for investment, trade, travel, and inter-personal connections.

“Side by side, it will also help other hospitality industry like hotels, accommodation facilities to grow in the State and boost the economic activities to a great-extend”, he said.

He said, “Now onwards, people from rest of the country can explore the rich scenic beauties and diverse cultures of our State as we are going to have air connectivity to the tourist places of the State namely Tezu, Pasighat, Ziro, Aalo, Mechukha, Tuting and Vijaynagar in days to come.

He added that beginning tomorrow, or on November 29, Alliance Air would begin operating fixed-wing flights (Dornier DO-228) along the Dibrugarh-Hollongi-Ziro-Lilabari route, and beginning on November 30, the same will be true for the Dibrugarh-Hollongi-Pasighat line. In the coming days, he added, we will also have fixed wing air connectivity to remote border locations like Tuting, Mechukha, and Vijaynagar.

He requested the Airport Authority of India to facilitate Instrument Landing System (ILS) and all navigation aids for all weather operation at Tezu Airport for year-round air connectivity to eastern Arunachal, which will be beneficial for the State's socioeconomic development. He noted that the Donyi-Polo Airport, Itanagar is the second airport in the State under the Airport Authority of India, the first being the Tezu Airport.