The Arunachal state administration is currently proposing to rename the Green Field Holongi Airport as Donyi Polo Airport, which represents the indigenous faith of the tribal people of Arunachal Pradesh since time immemorial. 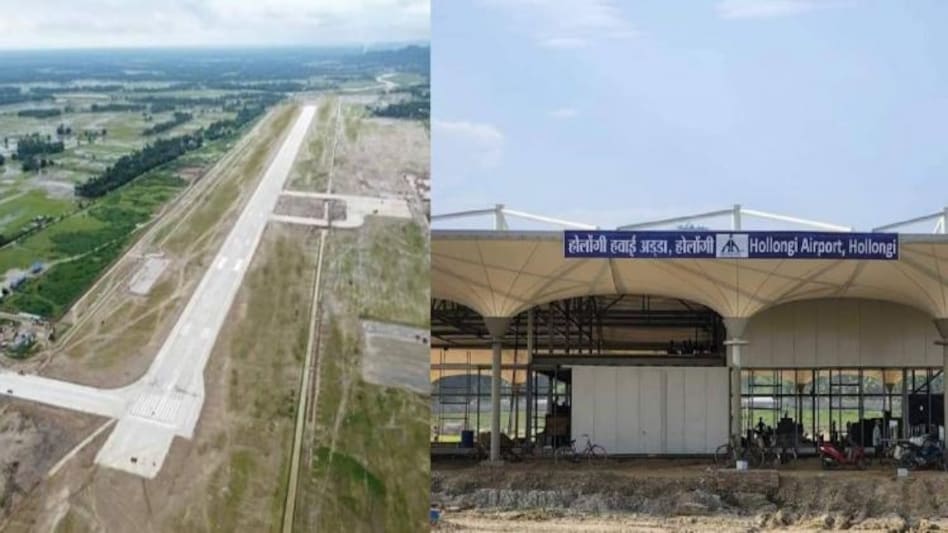 After 15 years of a long patient wait, finally the newly built Holongi Airport in Arunachal Pradesh’s capital Itanagar prepares for its opening on August 16.

The first and only airport in Itanagar, is currently under construction and is scheduled for PM Modi's inauguration on August 16.

Named as the Greenfield Holongi airport in Itanagar, the final finishing work at the airport is in full swing so that it opens its runaway for their maiden aircrafts to land and takeoff from the picturesque hilly state of Northeast India.

Sources indicate that PM Modi will inaugurate this airport, but confirmation has not been received as of yet. Nevertheless, government bureaucrats and airport authority staff are working around the clock to make the opening a success.

The Arunachal state administration is currently proposing to rename the Green Field Holongi Airport as Donyi Polo Airport, which represents the indigenous faith of the tribal people of Arunachal Pradesh since all of recorded time.

The then Home Minister Shivraj Patil and Prime Minister Modi laid the foundation stone for this airport in 2007 and 2019, respectively.

This airport was chosen to be built in Karsingsa, close to the Assam-Banderdewa border, but owing to political meddling, it was moved to Holongi in 2007, even after it had been inaugurated by the Home Minister of the Congress regime, who cited technical feasibility.

Following the PM's 2019 inauguration of this airport, the construction work was awarded to Dineshchandra R Agrawal Infracon Pvt Ltd of Ahmedabad in February 2020 through a tender at an estimated cost of Rs. 645 crore. According to Kaushal Patel, Project Director of the construction company, the project includes the development work, which includes the construction of airport pavements, air side work, terminal Building, and city side works.

According to records, the Indian Airport Authority provided 800 crores for land acquisition and compensation.

Speaking about the structure and style of the newly built airport, the organic shape of the roof breaks away from the severe geometry of angles and straight lines and creates an immediate bond with the spectator.

The inside of the structure is intended to give passengers a feeling of serenity. Free-flowing areas, a concealed service core, and a glass facade that ties the eye to the expansive scenic splendour of the Himalayan Foothills are used to achieve this.

The runway is 2300 metres long and can accommodate aircraft of the A320 type. Pavement work, a watch tower, a perimeter road, and other projects for the terminal building are all almost finished.

People in the capital were thrilled to see some test aeroplanes land at the future Donyi Polo Airport in Hollongi, Itanagar. The capital of Arunachal Pradesh, Itanagar, is the only one of the eight Northeastern states without an airport connection, but after the opening of the Donyi Polo airport near Holongi, all Arunachalees' long-held wishes have come true.

Talking to India Today exclusively Chief Minister Pema Khandu thanked Prime Minister Modi for focusing on the development of Arunachal Pradesh in particular and Northeast as a whole and said that PM has laid emphasis on transforming Arunachal Pradesh into a major gateway to SouthEast Asia by developing modern infrastructure across the state. "An airport to connect the capital city is a much-needed aspiration of local community which will also accelerate economic activity in the region.

In few years from now there will be direct flight from Itanagar to Mechukha, Anini, Dirang, Tuting, Aalo, Ziro without having worrying about inclement weather and to other states of India as well," said CM Pema Khandu.

Greenfield Airport now Donyi Polo Airport at Hollongi near the state capital Itanagar, the first full-fledged airport of Arunachal Pradesh, is all set to get operationalized on Independence Day this year, well ahead of its scheduled completion time, November 2022. Preparations are in place to receive the first-ever passenger flight.