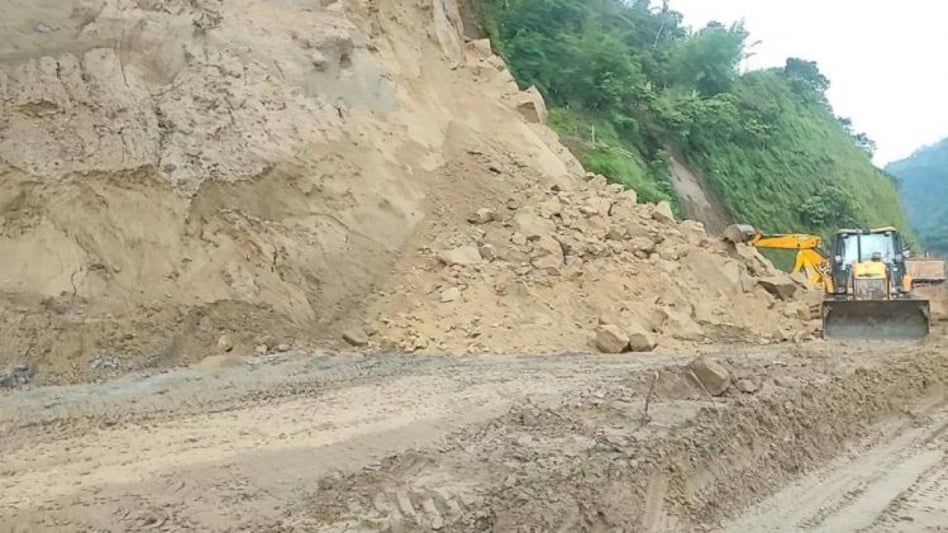 Incessant rains in the last 48 hours have caused severe landslides along the 14-kilometer Holongi route, which connects Arunachal and Assam. This has resulted in numerous roadblocks. To remove the debris, construction companies and Arunachal Pradesh's roads department are working round the clock.

Tap Marang, a local contractor who spoke with the publication, voiced concern and claimed that after removing debris at night using JCBs and dumpers, enormous landslides occur and obstruct the road the next day due to heavy and persistent rain.

Marang stated that highway Department engineers are working and monitoring continuously to clear the blockade that has occurred on this critical route. However, two locations are exceedingly dangerous, and at one point, more than half of the road was washed away completely, requiring time to reconstruct.

Earlier massive landslide blocked this Holongi -Itanagar causing a major traffic jam with hundreds of vehicles stranded for hours.  Hundreds of cars and two-wheelers were stranded following the disaster on both flanks of the important road, they added.

Though the administration has pressed men and machinery to clear the debris, officials during that time said that it would take at least a day or two to make the road fit for traffic but still the road is not being restored completely.

Continuous downpours over the last few days triggered landslides and floods in several districts of the state, thus disrupting road connectivity. Four people have been killed in the state since last month in rain-related mishaps.

The disaster management department has issued directives to all deputy commissioners to remain alert for responding to any eventuality promptly. It is also in touch with agencies such as the IMD and the Central Water Commission for early warnings.

Relief centres have been set up in all districts to provide shelter to the affected people. In the state capital, evacuation and shifting orders were served to 279 houses that were found vulnerable to flood and landslides, an official said.

According to the disaster management department, landslides and floods have damaged 524 houses in 87 villages since April, affecting a total of 11,000 people.

The road is the state capital's second major route, after NH 415, which connects Banderdewa, Naharlagun, and Itanagar. NH 415 has also been witnessing frequent landslides and it was blocked for a few hours.

Corrupt mindset in public service commission will not be tolerated, will be dealt with iron hand: CM Pema Khandu
advertisement