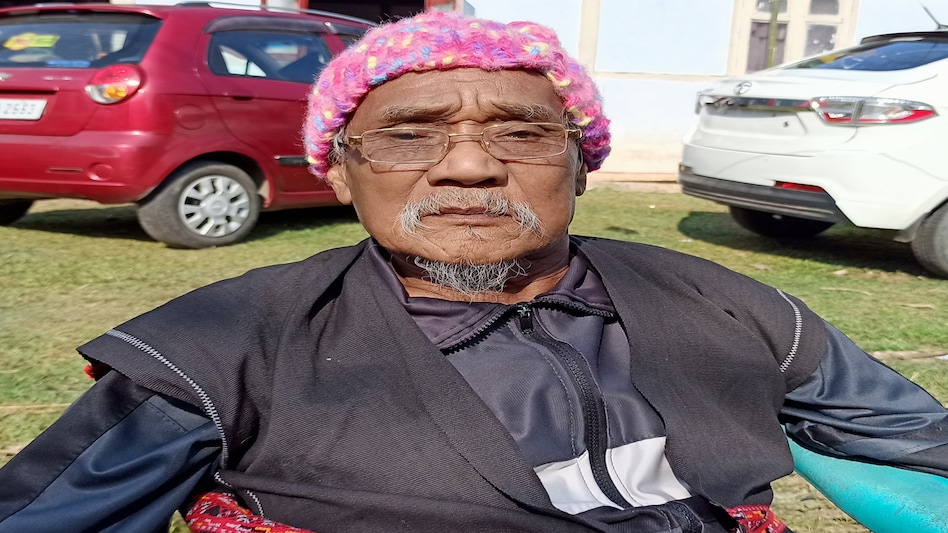 PASIGHAT: Known pharmacist of Lower Mebo under Mebo Sub-Division here in East Siang District Ume Perme, S/o late Gumin Perme and late Yamoni Perme, earlier popularly known as Umeshwar Perme who served the state as Pharmacist since the North Eastern Frontier Agency days recalled his dedicated service days on Saturday when his sons and daughters including son-in-laws, daughter-in-laws with grandchildren threw a birthday party for him at his native village New Borguli while also conducting a voluntary flood control works in the name of Ume Perme.

While informing about the birthday party cum voluntary flood control works carried out by the family members in the name of their father Ume Perme, Mrs Tuki Perme Lego, second daughter of Ume Perme, who is presently serving in the Wildlife Division as a Head Assistant at Naharlagun said that her father has always been a very dedicated person during his service days. “Our father is still serving the people even after his retirement long years ago as people known to him still approach him for medicine prescription/recommendation for certain illnesses. Today our father is almost paralyzed and walking hardly, but we are very proud of his contribution to the state and the society under his small capacity”, added Tuki Perme Lego.

Meanwhile sharing his service days while recalling first posting at  Siyum circle of Upper Subansiri District during in the year 1972, Ume Perme said that he served the people near border areas where his team even treated the army personnel guarding the international border who were facing severe health issues due to height at Indo-China border when Arunachal was known as NEFA in those days. After serving for 4 years at Siyum he served at Koyu, Sille and then posted back to his native Borguli village’s health centre where he served till his retirement. He was very instrumental in fighting against Blood Dysentery pandemic (E-Coli)  during 1985 at Lower Mebo areas as Borguli Health Centre, now Primary Health Centre Borguli was the only health centre in entire Lower Mebo villages. Also he worked day and night in fighting against the epidemic of Malaria during 1987 at the same Lower Mebo (Monggu-Banggo) villages as there was no regular doctor posted there then and he was the overall in-charge. He also worked for people at Leprosy colony, Pasighat and also participated in social works at Rengging village when the road was constructed in early days during school years.

Despite all these yeoman services for the state and his people, Ume Perme who is nearing 80 years as per original/unofficial birth record is facing hardship and struggling for his life with his other leg almost paralyzed. His land properties adjacent to Siang river was already washed away by the flood and his native New Borguli is also under threat from erosion by Siang River. While sharing his story with this scribe, Perme said that he is at least contended for having served his people even after retirement as many still come for medicine recommendation due to his good knowledge in the field of medication.

It is worth mentioning here that Perme who was born during the year 1948 at the then Borguli at present Namsing village side in a field, struggled so much and studied at Higher School, Pasighat (present IGJ Govt. Hr. Sec. School, Pasighat) where he was also selected for film industry at Kolkata but he couldn’t go there due to financial constraints. He also holds NCC ‘A’ certificate and his good work and silent dedication in the field of health services to the state need recognition from the state today. He has five sons (eldest died), three daughters and eight grandchildren and his wife late Abul Tayeng Perme has already passed away. It is said that his wife late Abul Tayeng Perme taught weaving to locals at Siyum circle as people there then were mostly almost without clothes.