Itanagar Municipal Corporation kicked off the ‘Har Ghar Tiranga’ campaign, which aims to hoist the tricolour in 20 lakh homes across the hill state before August 15 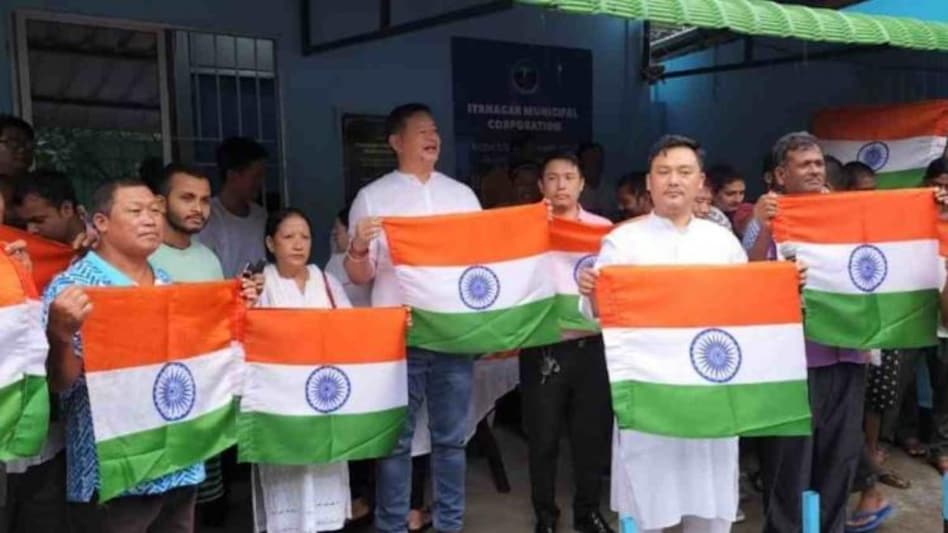 Itanagar Municipal Corporation on Wednesday kicked off the ‘Har Ghar Tiranga’ campaign, which aims to hoist the tricolour in 20 lakh homes across the hill state before August 15.

“Helping each other in distress is the actual concept of Azadi Ka Amrit Mahotsav said Mayor –Itanagar Municipal Corporation (IMC)–Tame Phassang while expressing concern over the devastation triggered by the flash flood in the twin capital in the wee hours.

IMC Mayor Tame Phassang told the crowd at the 'Har Ghar Tiranga' campaign launching event in Ward No. 17 that the true meaning of Azadi ka Amrit Mahotsav is solidarity and helping one another out in difficult times. “Therefore, I urge everyone to step up and provide the flash flood victims with any financial or in-kind assistance they could,” added Phassang.

The Mayor made a similar request to the Chief Minister, Union Minister Kiren Rijiju, MP for West, and MLA for Itanagar, requesting that they should hold a special meeting to assist those affected by the flash flood. Additionally, he said that the government's relief effort would fall short and be considerably underfunded, therefore authorities needed to take immediate action to assist the victims. “Additionally, I will travel to the locations to learn about the local conditions, and I will undoubtedly provide all assistance I can at my own expense,” said the mayor.

Prior to the start of the "Har Ghar Tiranga" campaign, the mayor asked the locals to raise the flag at their homes in accordance with the flag code.

“Hoisting the National Flag itself is a proud moment, and to observe the 75th year of India’s Independence, the government has allowed the common public to hoist the national flag. So every denizen should avail this opportunity and hoist the flag,” added the Mayor.

The campaign was started at the IMC Office by Mayor Itanagar Municipal Corporation Tame Phassang as a part of the "Har Ghar Tiranga Campaign" organized by Indian Prime Minister Narendra Modi to mark India's 75th anniversary of independence.

A campaign called "Har Ghar Tiranga" is being run by Azadi Ka Amrit Mahotsav to get people to carry the Tiranga home and hoist it to commemorate India's 75th anniversary of independence. According to Phassang, the programme aims to arouse feelings of patriotism and to raise awareness of the sacrifices made in support of India's freedom.

He also informed that the tricolour will be available in the office of the IMC for a minimum amount of Rs 25 only. “For public ease, Flags will also be available with the respective Corporators of each ward,” added Mayor Tame Phassang.