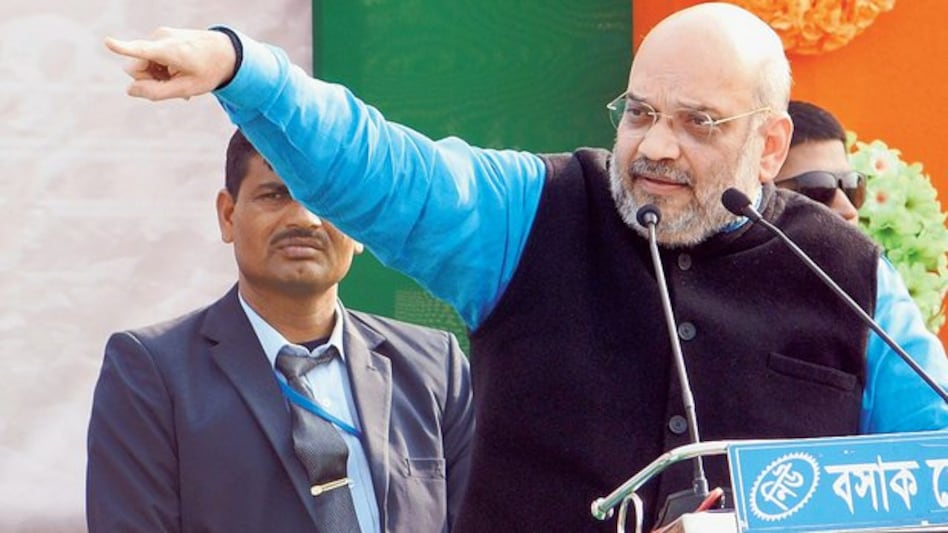 NALBARI: Union home minister Amit Shah today exhorted the people of Assam to give another term of five years to the BJP to mitigate the flood and erosion problem of the state.

“The people of Assam voted the BJP to power in 2016 and it succeeded in emancipating the state from bloodbath and agitations. I appeal to the people of the state to give the BJP another term of five years so that it can solve the biggest problem of the state – floods and erosion – forever. It is only the BJP that can solve this problem,” Shah said addressing the BJP Bijay Sankalp Samabesh here today.

Immediately after coming to power in Dispur, the Assam government had stated that the Centre has given its nod for dredging of the Brahmaputra and building express highways on both banks of the mighty river to mitigate the flood and erosion problem. However, no step was visible over the past four years. Assam is scheduled to go to polls in March-April.

Lashing out at the agitating organisations of the state, Shah said, “These are people who do not want development in Assam. They are just helping the Congress and AIUDF (All India United Democratic Front) to wrest power away from the BJP.”

Stating that the state was not in safe hands under the Congress and Badruddin Ajmal, he said the Congress cannot call the BJP a communal force after it had allied with the Muslim League in Kerala and the AIUDF in Assam. He went on to add that the Congress-AIUDF alliance would open all gates for influx from Bangladesh and the BJP can only check it.

The Congress and other regional parties in this part of the country, however, hold the BJP of opening the floodgates for refugees to Assam by enacting the Citizenship Amendment Act 2019 that lays red carpet to religious minorities from neighbouring Muslim countries to migrate to India.

The Union minister also counted on the various schemes the Assam government has implemented over the past four and a half years. He also mentioned that the BJP government in Assam has provided funds to 8000 naamghars (community prayer halls) and freed the Kaziranga National Park from encroachment.

Shah further said the BJP government at the Centre has increased the finance commission’s grant to Assam of Rs 79,000 crore during Congress rule to Rs 1.55 lakh crore under Niti Aayog.

He also said the BJP government, that has already empowered the long neglected tea community of Assam, was planning to provide a grant of Rs 12,000 each to temporary tea workers during pregnancy.

TMC published its manifesto in Meghalaya. What it means to the voter

Do you know who is Mr Tweet? Meet him.