GUWAHATI: Assam government announced the continuation of its fee waiver scheme under Pragyan Bharti on September 6 for free admission in HS/Degree and MA/MSC/M.COM courses for those students whose income certificate is below 2 lakhs.

Students whose parents work for the state or central governments are disqualified to take the benefits of the Pragyan Bharti Scheme.

Students will be required to submit an undertaking stating that neither of their parents works for the state or the central government.

Students who have less than 75% attendance will also be unable to benefit from this scheme.

Private colleges, universities, and Central Universities in Assam, on the other hand, will not provide students with benefits under the Pragyan Bharti scheme.

In order to get their fees waived the students must produce their income certificate issued by the circle officer.

In order to deal with the situation, the state government issued another notification on September 13, 2021, in which it provided some alternatives for students. 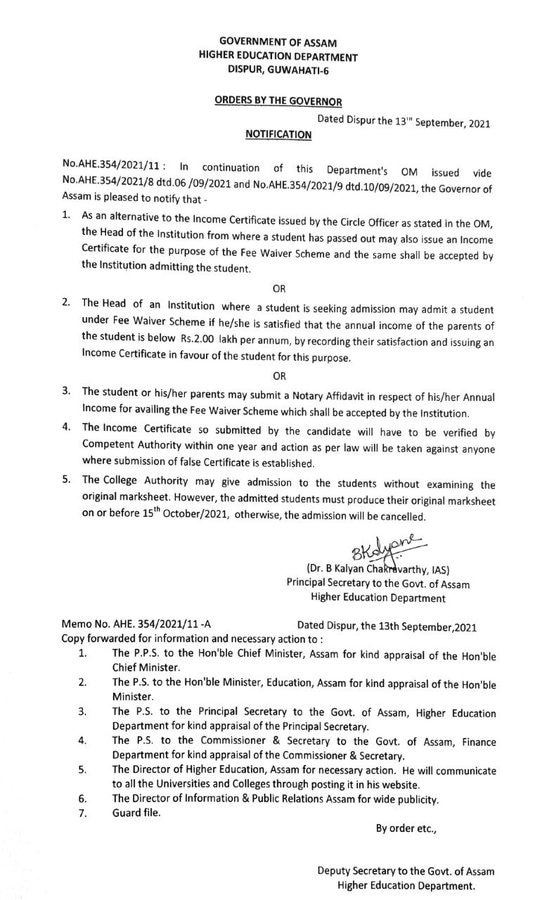 State Education  Minister Ronoj Pegu too to Twitter and wrote, “ As an alternative to Income Certificate issued by Circle Officer, Head of the institution from where a student passed out can issue an Income Certificate for Fee Waiver Scheme in admission."

The Head of the institution where a student is seeking admission may admit a student if he or she is satisfied that the annual income of the student's parents is less than Rs. 2 lakh per year, the minister added.

In terms of annual income, the student/parents can submit a notary affidavit. Within one year, the certificate must be verified by a competent authority, Minister Pegu said.