BJP won a total of 14 seats out of 22 seats in the Thengbal Kachari polls.

An estimated 70.09 per cent of 86,351 voters on January 20 exercised their franchise in the election to Thengal Kachari Autonomous Council in Assam, according to official data.

Out of the 22 constituencies, elections took place in 21 with one candidate being declared elected uncontested, the State Election Commission Assam (SECA) said in a statement.

The elections took place in 143 polling stations in Dibrugarh, Lakhimpur, Golaghat and Jorhat districts, while the candidate in the lone constituency in Dhemaji district was already elected.

People cast their votes in ballot papers and counting will take place on January 24.

The Council with headquarters in Titabar is presently under the control of the BJP, led by Chief Executive Member Kumud Chandra Kachari. 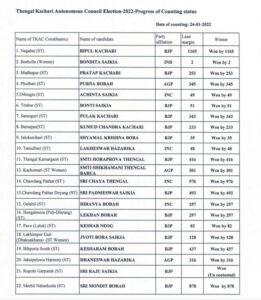