In a ceremonial function organized at the Veterinary Field at Khanapara in Guwahati, Assam Chief Minister handed letters to 11236 candidates who cleared the state-level examinations under the various departments of the state government. 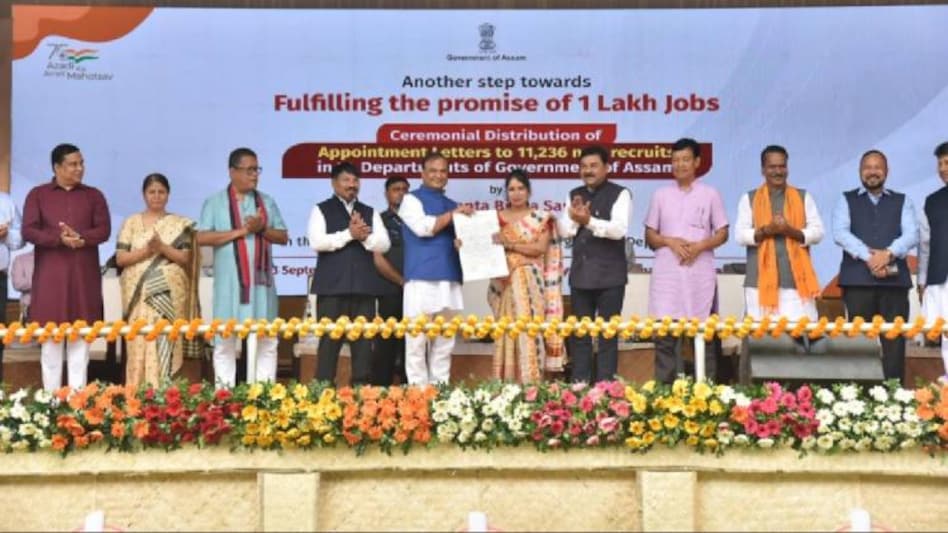 Successful candidates and their kin reached Khanapara field today morning on September 23 to receive appointment letters in 21 departments under the Assam government.

In a ceremonial function organized at the Veterinary Field at Khanapara in Guwahati, Assam Chief Minister handed letters to 11236 candidates who cleared the state-level examinations under the various departments of the state government.

Taking to Twitter, Assam CM said, “We commit, we deliver-Major milestone in our drive to ensure one lakh jobs in Assam. Following 27,737 successful recruitments, GoA will now hand over appointment letters to 11236 candidates in 21 govt depts. On September 23, 2022, in a ceremonial function in Khanapara, Guwahati.”

“Whether our government exists or not, but our attempts to conduct fair and timely exams have been successful and will continue to do so. Post SI exam scam, we decided to conduct the Assam Police recruitment exam in the utmost strict and fair manner after the TET exam. If one observes, the state education and police department receive a maximum number of entries as a majority of the candidates apply for general posts. We then decided that even in the police recruitment exam, the entire process will be conducted with utmost dedication and purity like Ma Ganga,” added CM Sarma while giving his speech.

Continuing with the controversy surrounding the opposition to the government’s decision of introducing English as a medium of instruction from classes three and above in all schools of Assam and subjects like mathematics and science to be taught in English, Assam CM said that there is a section of people who are against the idea of growth and development of the financially poor background students and have burdened the responsibility of protecting the mother tongue on the shoulders of the backward and financially poor students.

Reacting to the complaints received on the decision of mobile internet suspension during exams, Assam CM said, “We are trying to conduct exams in a completely fair and clean manner. Then why this opposition? If the internet is suspended for two hours, will that lead to the disappearance of society? Will Assam be hit by an earthquake if the internet is not available for two hours? When we are watching the cinema in the cinema hall for three hours, then do you find the internet available when you are watching movies? When you all will be watching India vs South Africa match here, then will you keep your internet open during that time? If I have to uplift the poor students of Assam, then if required I will suspend internet services.”

Hitting out at people who speaks negative about the government, Assam Cm Himanta Biswa Sarma said that Assam is on the path of development and there is no space for negativism in the state. “Assam has crossed the era of negativism, and people speaking negatively against the state and its development, those people should leave the state or else speak positive and think optimistically and undertake the decision to establish golden Assam, a golden era.”