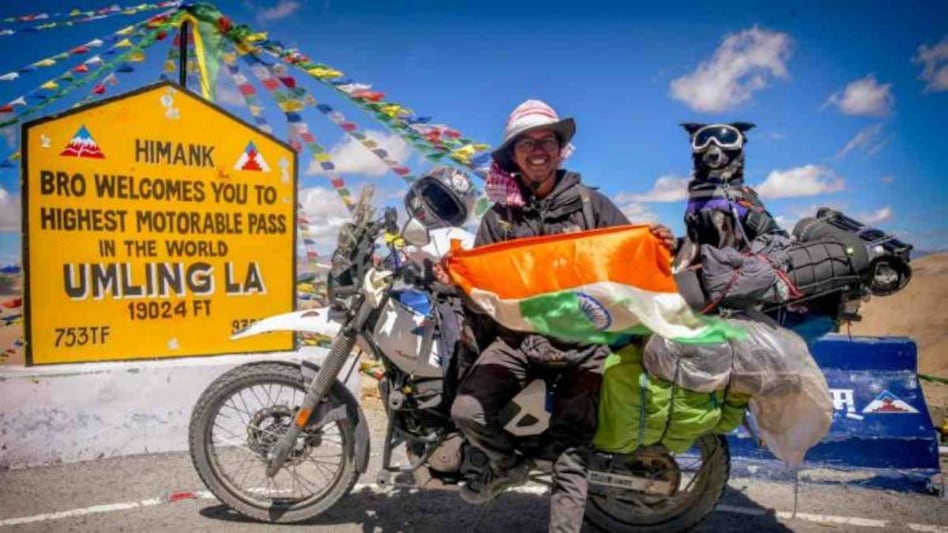 Sureng Rajkonwar has become the first biker from Assam for his adventurous motorcycle trip with his pet dog named Bella towards the World’s Highest Motorable Road in Eastern Ladakh at an altitude of 19,300 feet above sea level.

Rajkonwar had an incredible 2458 km journey earlier in June with his pet dog from Dibrugarh to Delhi on his scooty flagging prevention of cruelty to animals.

Bella and Sureng started their journey on August 18, 2022. Bella, a female dog, has been traveling with Rajkonwar since she was adopted from an animal rescuer in Uttarakhand by Sureng & his wife.

In August 2022, Rajkonwar along with Bella and 9 other bikers and travelers took the Leh and Ladakh trip and planned to ride all the way to the highest motorable road in the world.

The adventurous journey with Bella

Due to the pandemic, there was a three-year delay. So, when the time approached, the trip had been planned by ‘I Dream Ride’ club members starting on August 18. Seven guys including Shantanu, Prakash, Prayash, Trinayan, Porag, and Sourav met me, Bella, and Dipankar in Jammu after we left Delhi. We left for our journey from there. Bella's journey to Srinagar was incredibly taxing due to the hot, humid weather. However, once she met my friend, she was showered with affection and food. After that, she continued pretty much as before.

Delhi, Sajanpur, Jammu, Srinagar, Kargil, Panikhar, Padum, Leh, Khardungla, Nubra Valley, Pangong, Hanle, Umlingla, Nyoma, Sarchu, Keylong, Sachpass, Manali, Kasol, and Delhi were all covered. Zanskar wasn't challenging, but the road conditions were exhausting because some areas were still under construction and others had no roads at all. But we succeeded in finishing the circuit. Leh circuit was simpler than Zanskar and the Sach Pass because BRO constructed all of the roads. We did that without any trouble. We rode to Khardungla, the world's eleventh-highest motorable road, and then on to Umlingla, the highest motorable road in the world right now. After that, we rode to Sach Pass, which is regarded as one of the world's most dangerous passes. There are very few who have completed all three circuits at once. We succeeded in one go, and Bella and I became the first ones to ride a bike to the highest motorable road in the world, Umlingla. IDR is also the only motorcycle club to have ridden a pet to the highest motorable road in the world. Since no one has ever done it, we are eager to claim it as a world record in the Limca Book of Records. I was traveling in an Xpulse 200 4v from Hero Moto Corp. The group who rode from Delhi traveled 3615 kilometres; the remaining riders had to quit before reaching Sach Pass due to schedule constraints.

Was Bella scared when you reached the destination?

No, she is a brave child, and our trip was more about enjoying the journey than it was about getting to our destination. She made it to every location without difficulty, and all she wanted to do was let go of the leash. However, I couldn't let go of her leash due to the possibility that she could race down the mountain in search of anything she thinks is suspicious. Her return would take time, and there's also a chance that other dogs would bite her. I kept her on a leash and encouraged her to walk, interact with people, and be offered food in places like Khardungla, Umlingla, and the Sach Pass.

Bella’s health during the journey

Bella endured a scorching wave from Delhi to Kashmir. Due to extensive pampering from my pals before entering Kashmir, she had some mildly spicy foods that gave her gas, but one of the riding group's fathers is a veterinary doctor. He recommended some medication. After taking the medication, she immediately started to act active and playful. She did well post that.  She knew what to eat and what not.

Some unusual and wow moments

Unusual occurrences include times when club members had to leave mid-ride owing to breathing problems and a lack of time. One of the unusual events was when Bella was denied permission to stay in one of the Keylong hotels despite the fact that I am familiar with the owner. However, we made it work in a different hotel. And it goes without saying that having a pet on a bike was odd for the majority of people. The finest aspect, though, was how well-behaved, pampered, and kind everyone who came up to us was toward Bella. The entire journey was an amazing experience, but arriving in Umlingla was one of the finest parts because no one from Assam, the northeast of India, or hopefully anywhere else had done it before. Bella even poops on the highest motorable road in the world, which is hilarious. Seeing Bella and my friends happy was a wow moment for me. Bella went swimming at Pangong Lake, got wet at Jogini Falls, raced around in Khardungla, and then made it home safely.

Any next trip that you’re planning to?

When our minds are at ease, we may make plans for the future. Additionally, I'm searching for sponsors to help pay for our vacation. Though my motorcycle group intends to travel from Delhi to Kerala and return the next year. Bella will take part in it as well.

It needs mention here that the ‘I dream ride’ motorcycle club founded by Sureng Rajkonwar in 2013 is also the first motorcycle club in the world to reach that point with a dog.