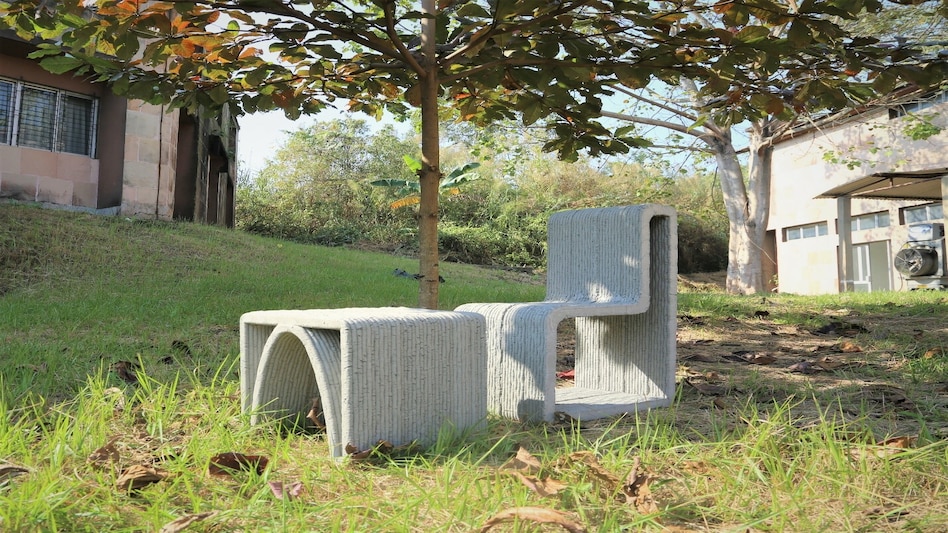 Researchers from the Sustainable resources for Additive Manufacturing (SReAM) at IIT Guwahati have developed new cementitious mix compositions, amenable for 3D printing. The concrete printer jointly developed by IIT Guwahati and DELTASYS E FORMING is capable of printing components up to 1 m long, 1 m wide and 1 m tall. The complete cycle for 3D-printed urban furniture took about 20 minutes to complete.

Concrete 3D printing is gaining momentum in the building and construction industries. Recent developments in this field such as 3D printed modular houses, pedestrian footbridges, office buildings, public schools, low-cost toilet units have the potential to initiate a paradigm change in the practice of construction.

The IIT Guwahati Research Group used a specially-developed printable concrete containing industrial wastes as binders to build 3D printed furniture with a seating height of 0.4 m, a width of 0.4 m, and arch-shaped support that was modelled and sliced using SolidWorks and Simplify3D, respectively. The entire unit was printed layer by layer at an 80 mm/s speed, with each layer having a 10 mm height. After the unit was printed, it was covered by moist gunny bags for 7 days to cure before being used.

Traditionally, these structures were mold casted which requires more concrete material, labour, and formwork preparation. However, with 3D concrete printing, optimized designs are printed with 75 per cent less concrete and without the need of mold.

Speaking about this Research, Dr. Biranchi Panda, Department of Mechanical Engineering IIT Guwahati, said, “We showcased how material-efficient structures can be produced in our lab scale 3D printer. Our goal is to design high performance concrete mixes made from industrial wastes for printing of such complex structures.”

Highlighting the unique aspects of this research, Prof. T. G. Sitharam, Director, IIT Guwahati said, “3D printing of concrete can be a technological solution for reducing carbon footprint in building and construction industry. From Indian context, techno-economic analysis must be carried out that take into account not only the environmental sustainability but also aspects relating to cost, quality, labor, and maintenance associated with 3D printing.”

The research team believes that the on-demand, on-site 3D concrete printing will definitely have a global impact on versatile construction applications and multi-billion-dollar market worldwide. The future jobs will be marshalled into design, automation, servicing, and maintenance of the digital systems.

Indian Institute of Technology (IIT) Guwahati established in 1994 has completed 25 years of glorious existence in 2019. At present, the Institute has eleven departments, five inter-disciplinary academic centres and four schools covering all the major engineering, science and humanities disciplines, offering BTech, BDes, MA, MDes, MTech, MSc and PhD programmes. The institute offers a residential campus to 412 faculty members and more than 6,000 students at present. Besides its laurels in teaching and research, IIT Guwahati has been able to fulfil the aspirations of people of the North East region to a great extent since its inception in 1994. The picturesque campus is on a sprawling 285 hectares plot on the north bank of the Brahmaputra, around 20 kms from the heart of the Guwahati city.

IIT Guwahati is the only academic institution in India that occupied a place among the top 100 world universities – under 50 years of age – ranked by the London-based Times Higher Education (THE) in the year 2014 and continues to maintain its superior position even today in various International Rankings. IIT Guwahati gained rank 41 globally in the ‘Research Citations per Faculty’ category and overall 395 rank in the QS World University Rankings 2022 released recently. IIT Guwahati has retained the 7th position among the best engineering institutions of the country in the ‘India Rankings 2019’ declared by the National Institutional Ranking Framework (NIRF) of the Union ministry of Human Resource Development (HRD). IIT Guwahati has been also ranked 2nd in the ‘Swachhata Ranking’ conducted by the Govt. of India. Recently, IIT Guwahati has been ranked as the top-ranked University in 2019 for IT developers by HackerRank in the Asia-Pacific region.