Not for a year or two, but after a gap of 46 long years, a brother finally reunited with his long-lost sister on September 26. 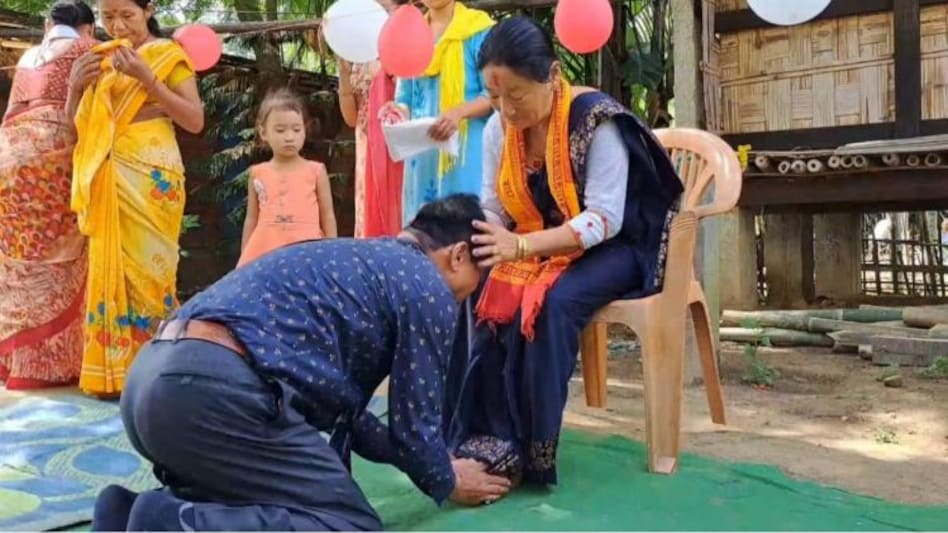 Not for a year or two, but after a gap of 46 long years, a brother finally reunited with his long-lost sister on September 26.

Like the story of a typical Bollywood movie, this reunion event of a brother with his sister, has now surprised the villagers of Rampur in Merapani in Golaghat district.

To everyone's surprise on September 26, a woman named Chandramaya Rai arrived at her home in Rampur after more than four decades.

As soon as Chandramaya arrived at Rampur village in Merapani from our bordering country Nepal, brother Padum Kumar Rai was overwhelmed with joy.

Kumar led his sister to his house in the presence of the villagers through a holy ceremony.

According to reports, in 1977, the 13-year-old Maruni alias Chandramaya Roy was on a visit to Dimapur in Nagaland with her relatives but didn't return back.

The family, finally gave up the hope of meeting Maruni as they could not find anything even after much searching. Meanwhile, Maruni left for Nepal after being separated from her family.

Four decades have passed by, with two of Maruni's four children already married, although she often remembers the house, except for the name Merapani, Maruni did not remember the complete address of the place of birth.

Fortunately, Maruni alias Chandramaya's daughter got married to a man from Dimapur in Nagaland and the girl reached her mother's house in Rampur one day in search of Merapani, a place she had heard from her mother's mouth.

On the basis of the news of that daughter, Maruni alias Chandramaya Rai finally reached the house in Rampur on September 26 at the end of 46 full years.

The joy of arriving at her birthplace at Chandramaya Roy Hatha, a resident of Ilam district in eastern Nepal recently, was filled with tears of her brother Padum Kumar.

A section of locals in Rampur village also witnessed the scene of the brother-sister grand meeting. Chandramaya Roy will return to Nepal after spending a few days at her brother's house.

Chandramaya Roy arrived in Rampur on Monday along with two daughters as well as a son.

Surprisingly, in the yester years, Maruni and now a Nepali citizen, Chandramaya, who has spent the last 46 years in Nepali language culture abroad of Nepal, have not forgotten the Assamese language.