GUWAHATI: The North East Indigenous Peoples Forum has opined that the state borders, especially disputed ones, are occupied by illegal migrants, posing threat to the indigenous peoples of the Northeast.

Apart from highlighting the issue of "illegal migrants", it also expressed "shock and grief" at the heavy loss of lives in the ongoing border conflict between Assam and Mizoram, it appealed to the Chief Ministers of Assam and Mizoram to take appropriate steps for the restoration of peace in border areas.

The organization today conducted an online meeting to discuss the present situation prevailing in Dholai - on the Mizo-Assam border conflict that resulted in the deaths of six Assam Police personnel. It also discussed the illegal migrant issue.

Illegal migrants usually trickle into the Northeast via the porous international borders and has long haunted the region.

The NEIPF in a release undersigned by Anup Chetia (alias Golap Baruah) also stated that various agreements were reached between the respective state governments to maintain a status quo in the disputed areas, but these agreements were repeatedly violated, resulting in tension and damage to people's property living in the affected areas.

The Border conflict between the states of North East has been lingering on for a considerable time, where tension and conflict crop up repeatedly with no solution in sight resulting not only in the immense hardship and suffering for the people living in these disputed border areas but even to the extent of losing precious human lives," the NEIPF said. 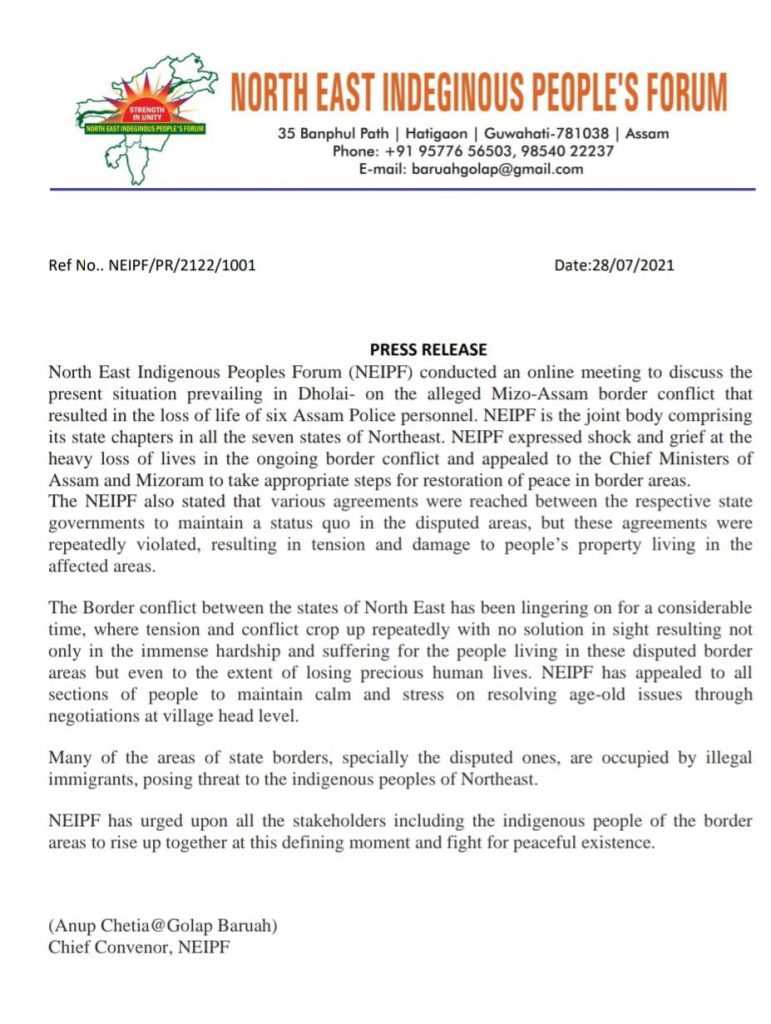 It has appealed to all sections of people to maintain calm and stress on resolving age-old issues through negotiations at village head level.

NEIPF has urged all the stakeholders including the indigenous people of the border areas to rise up together at this defining moment and fight for a peaceful existence.