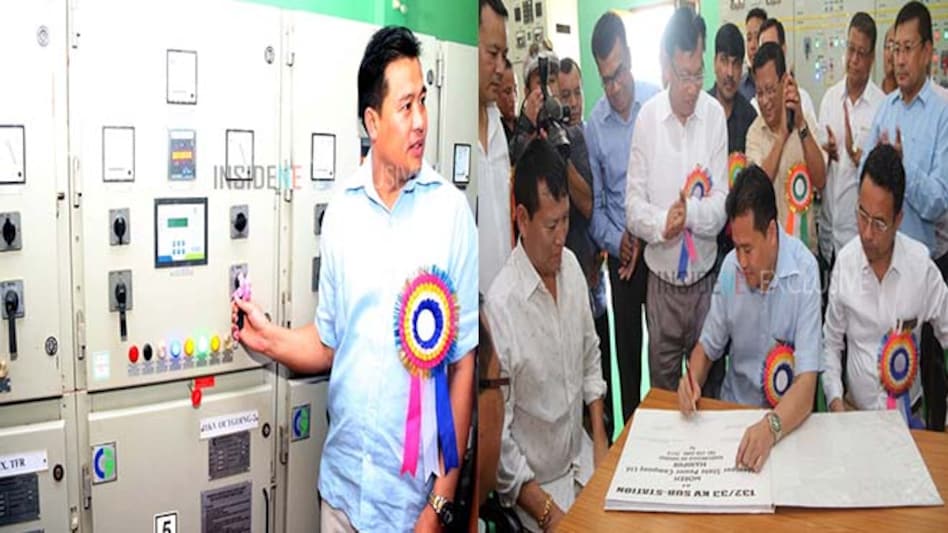 Power Minister Thongam Biswajit Singh inaugurated a 132/33 KV Sub-station at Moreh today. Addressing the inaugural function, Shri Biswajit said that the Power Department has earned revenue of Rs. 222.68 crore for the year 2017-2018 which is also a big achievement of the new government.

The Minister also explained the importance of power in today’s age and said the advancement in technology as well as industrialization is not possible without power.

Biswajit said that in accessible villages where stringing of power lines and setting up of tower are possible, power supply is made through Grid Lines, whereas for inaccessible areas, power supply is being arranged through off-grid lines for the time being. However, these Off-Grid lines will also be converted into Grid Line when possible.

He also said that Smart Meters are supposed to be introduced, but due to certain problems including bad digital connectivity, we are still utilising pre-paid meters. However, efforts are also on to start installation of Smart Meters in some selected areas of Imphal West.

Elaborating on the importance of renewable energy, the Minister also urged the gathering to install roof top solar power plants. He said this will help in conservation of energy. He continued that 33 areas for setting up mini-hydro projects in the State. There are also plans to set up wind mill plants in the State for which seven sites have been identified.

The Minister also said that the UJALA Yojana Scheme which is sponsored by the Central Government has not reached the targeted beneficiaries due to lack of information, education and communication. He further expressed the need to make the public unaware of the scheme which is aimed to save money, energy and preserving the environment.

The Minister also assured to improve all road surfaces in and around Moreh according to priority basis. He also inspected infrastructural development work at Moreh Town especially the ongoing renovation work at Trade Centre. Water Resource Minister Shri Letpao Haokip said electricity or power has today become one of our basic needs. He further expressed the need to create awareness among the public to save energy.