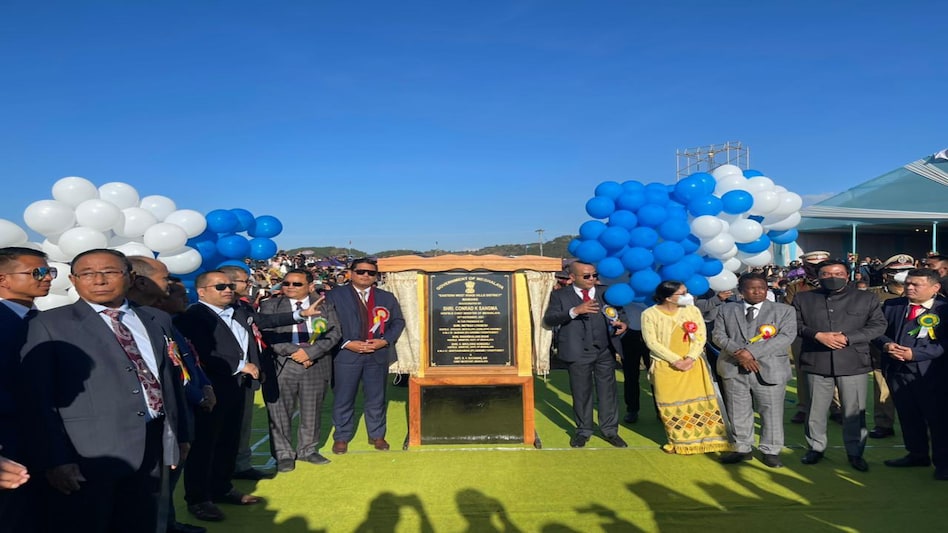 SHILLONG: The Meghalaya Chief Minister Conrad K. Sangma in presence of Speaker of Meghalaya Legislative Assembly Metbah Lyngdoh and other cabinet ministers and MLAs today inaugurated the new district of ‘Eastern West Khasi Hills’, which was bifurcated from its parent district of West Khasi Hills.

The new district comprises of Mairang and Mawthadraishan C&RD blocks respectively. Mairang is one of the oldest civil sub-division, which was inaugurated on November 10, 1976 and exactly after 45 years, it was upgraded to a new district.

The new district will be headquartered at Mairang.

Inaugurating the new district of ‘Eastern West Khasi Hills’ amidst a festive mood in Mairang, Chief Minister Conrad K. Sangma said that the new district will bring administration closer to the people.

He said that the new district was a long felt aspiration and desire of the people and government had to consider it after screening different parameters. He also told the gathering about his visit to Mairang as an opposition leader, where people had spelt out on the need for creation of a new district.

“The new district was created not because it is in Khasi Hills or Jaintia Hills or Garo Hills but purely on basis of certain parameters, which had put the region in the bottom list of all developmental activities. We wanted to bring administration closer to the people and hence the 12th district of the State was created,” he said.

He also took the opportunity to inform the people of the State that MDA government has always kept the peoples issues as top priority. “Whatever concerns the people have raised, including those which were raised earlier, our MDA government has been very prompt to find an amicable solution to address the concerns,” he added.

“We have been a public oriented and a people centric government, a government that is for the people of our State,” he stressed.

He also told the gathering that whenever as Chief Minister, he inaugurates a development project there is always discontentment in certain part of the state as he is labelled of being ‘selective’ and ‘preferential’ in carrying out development activities.