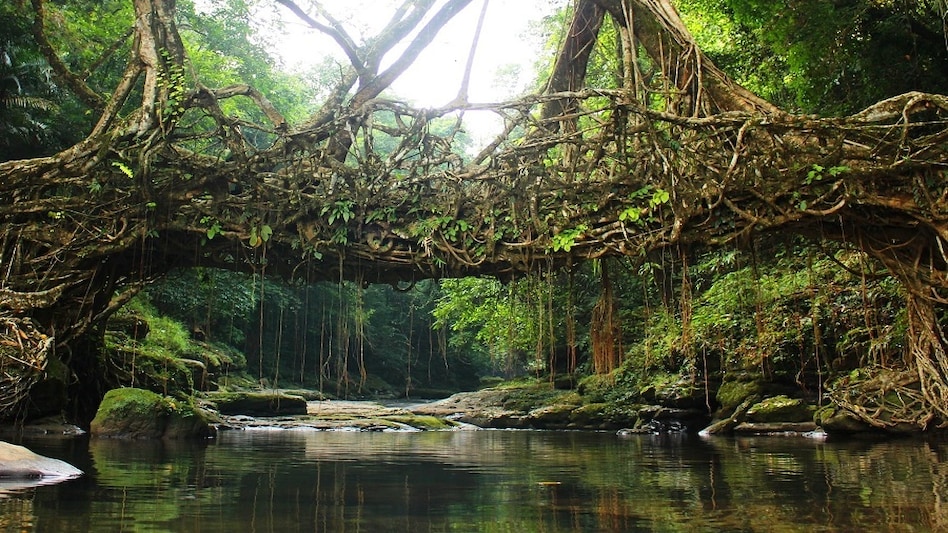 The Living Root Bridges in Meghalaya have made its way into the tentative list of UNESCO World Heritage Sites. The  unique natural phenomenon moulded by human creativity has been tentatively added to the UNESCO world heritage site list, officials announced on Tuesday, March 29.

There are roughly 100 known living root bridges in 72 villages in the hilly state's East Khasi Hills area and West Jaintia Hills district, which are locally known as "Jingkieng Jri."

Meghalaya Chief Minister Conrad K Sangma tweeted his delight over the inclusion of the famous living root bridges in the United Nations Educational, Scientific and Cultural Organization's (UNESCO) tentative list of world heritage sites. "It gives me great pleasure to inform you that 'Jingkieng Jri': Living Root Bridge Cultural Landscapes of Meghalaya has been tentatively added to the UNESCO World Heritage Site list. In this ongoing journey, I applaud all community members and stakeholders."

Meanwhile, Meghalaya's Forest and Environment Minister also informed about the news with delight, "I am happy to inform you that our 'Jingkieng Jri: Living Root Bridge Cultural Landscapes of Meghalaya has been placed on the UNESCO World Heritage Site tentative list,"Minister James K. Sangma stated in a series of tweets.

"The living root bridges are notable not only for their exceptional human-environment symbiotic interaction, but also for its pioneering application for connectivity and resilience, as well as the importance of adopting sustainable ways to balance economy and ecological." "I'd want to applaud members of various communities, stakeholders, and everyone else who is striving to protect these complex bio-engineered bridges," James K Sangma stated.

A living root bridge is similar to a suspension bridge in that it is constructed by guiding the flexible roots of the rubber fig tree across a river or rivulet and allowing the roots of large trees to develop and strengthen over time.

The roots of a single tree planted on one side of a stream or river are stretched to create the majority of these root bridges. A bridge of this type takes roughly 15 to 20 years to construct and has a lifespan of several millennia.

Some of these bridges are said to be over 200 years old, outlasting current technology-based bridges.

Meghalaya's double-decker living root bridge, which is also a bio-engineering marvel, has previously been featured in national events such as the Republic Day parade tableau.

The Living Root Bridges, with spans ranging from 15 to 250 feet, can withstand storms and flash floods and serve as a symbol of humanity's sacred link with nature. Scientists presented their findings of unusual orchids, amphibians, and animals that may be found on these root-bridges at a National Convention on the Root-Bridges held here last year. Because of its topography, visual splendour, and vegetation, Meghalaya is frequently compared to Scotland.