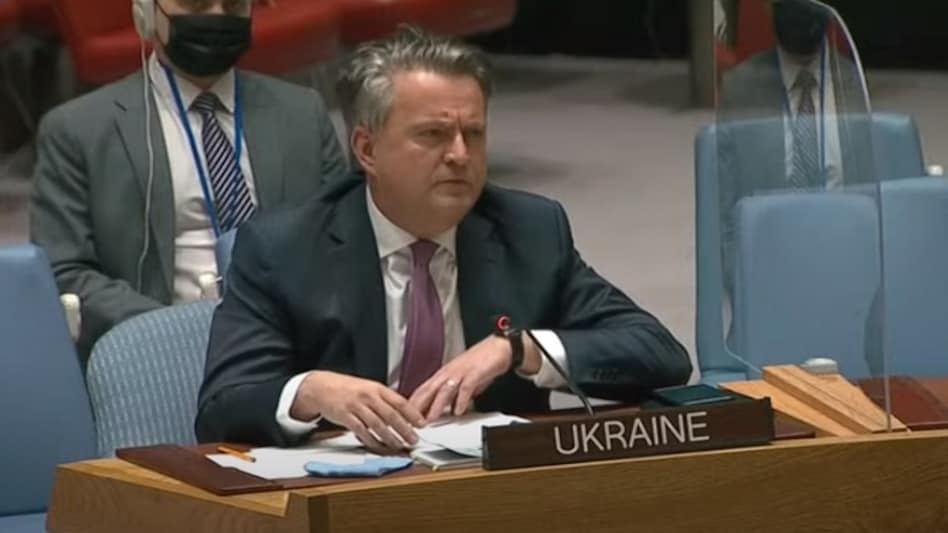 Condemning Russia's move to recognize regions of Donetsk and Luhansk, the Ukrainian Ambassador to United Nations on Tuesday demanded Moscow to return to the table for negotiations as well as immediate and complete verifiable withdrawal of occupation troops.

Russia has recognized the independence of breakaway regions Donetsk and Luhansk. This latest move by the Russian President has led to increased tensions in the region.

"We demand Russia to return to the table for negotiations. We condemn the order to deploy additional Russian occupation troops in the territories of Ukraine. We demand the immediate and complete verifiable withdrawal of occupation troops," said Ukrainian envoy to UN Sergiy Kyslytsya at an emergency meeting on Ukraine.

Underlining that they are consistent in their actions, Kyslytsya said Ukraine are committed to a political and diplomatic settlement, added that "we do not succumb to provocations."

The US has strongly condemned President Putin's decision to recognize Donetsk and Luhansk as "independent," calling this decision a complete rejection of Russia's commitments under the Minsk agreements.

"This move by Russian President Putin is clearly the basis of Russia's attempt to create a pretext for the further invasion of Ukraine," she added.

Amid an intense spike in shelling in eastern Ukraine by opposing sides, the concentration of Russian troops reportedly continues to increase at the country's borders.

Meanwhile, Russia said that it remains open to diplomacy for a diplomatic solution.

"However, allowing bloodbath in Donbas is something we don't intend to do. We are forced to note the negative role played by our Western colleagues led by the US," said Russia at the UNSC meeting on Ukraine.

UN chief Antonio Guterres has expressed concern over Russia's decision on the status of certain areas of eastern Donetsk and Luhansk regions.

The UN chief called for "the peaceful settlement of the conflict in eastern Ukraine, in accordance with the Minsk Agreements, as endorsed by the Security Council in resolution 2202 (2015)".