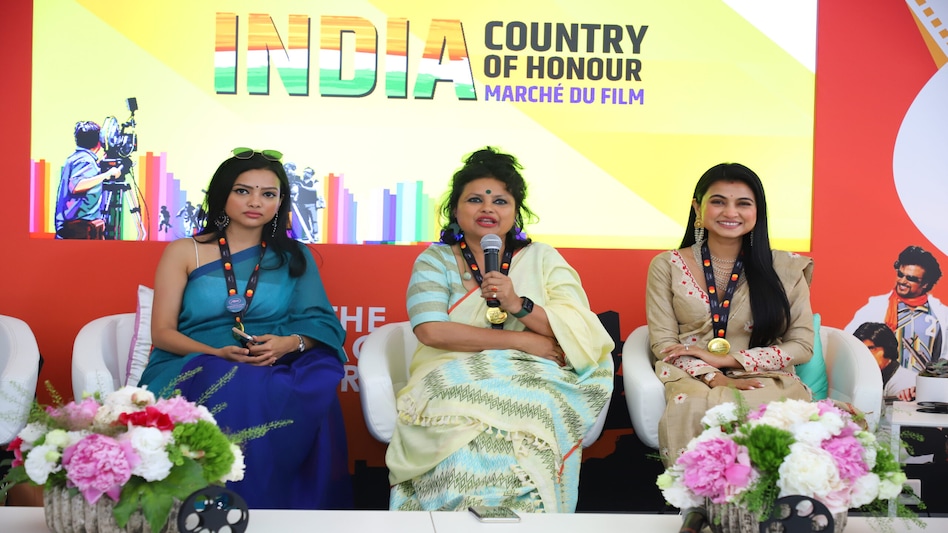 International media and film fans from around the world were ecstatic to learn about Assam's popular actress and filmmaker Aimee Baruah's much-discussed 'Semkhar' at the world's prestigious Cannes Film Festival. Significantly, Aimee Baruah enthralled the world's film lovers as well as international media representatives with a 10-minute speech on 'Semkhar' at the Indian Pavilion of the Cannes Film Festival's 'Country of Honour.'

“I'm completely overwhelmed. Speaking about 'Semkhar' in front of the world media and film society. I am astounded by the strong interest that the world has expressed in learning about 'Semkhar.' Their eagerness to learn about a new language, new things, new traditions, new places, and so on was a dream come true for me. Their curiosity about whether such a place exists in Assam cannot be expressed in the true sense of the word. This is the highest honour, the greatest gift for us”, actress Aimee Baruah shared her happiness in front of the media.

Filmmaker Aimee Baruah was officially selected from the Government of India to speak at the Indian Pavilion of the Cannes Film Festival on 'Semkhar' which won the best film honour.

The trailer of 'Semkhar,' which was shown at the event, also impressed international media representatives. It should be noted that the 'Semkhar' was made in Dimasa language. People were ecstatic to learn about the movie's various aspects. Journalists and movie fans asked many questions to Aimee Baruah like how, why, and where the idea for 'Semkhar' came about, what challenges they faced and how they overcame while filming 'Semkhar,' whether such a place still exists in Assam, et al.

It may be recalled that it is a privilege to have the opportunity of filmmakers or people involved in this field speaking for even a second on a stage attached to the Cannes Film Festival. It needs mention here that the National Film Festival and Indian Panorama are ranked highest in India.

The posters and trailers of Aimee Baruah's new documentary 'Screaming Butterfly' (Screaming Butterflies) were also unveiled during the same event. On May 29, Apurva Chandra, Secretary, Ministry of Information and Broadcasting, Government of India, released a poster of 'Screaming Butterfly' which has been selected for the competition section of the International Film Festival in Mumbai.