Sharing a picture where Sonam Kapoor, Anand Ahuja, and their one-month-old son are seen dressed in yellow, revealed the name of their boy, as well as the reason behind it 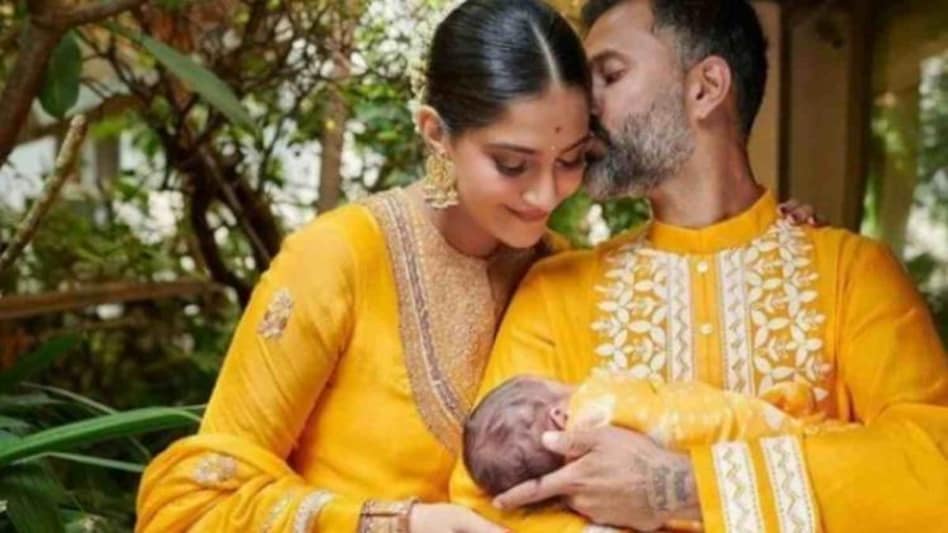 Actor Sonam Kapoor and her husband Anand Ahuja have unveiled the name of their one-month-old son in their recent Instagram post.

Taking to Instagram, both Kapoor and Ahuja shared a picture on the occasion of their son's first anniversary, the couple named their child Vayu Kapoor Ahuja.

“In the spirit of the force that has breathed new meaning into our lives...In the spirit of Hanuman and Bheem who embody immense courage and strength...In the spirit of all that is sacred, life-giving, and eternally ours, we seek blessings for our son, Vayu Kapoor Ahuja. In Hindu scriptures, Vayu is one of the paanch tatvas. He is the deity of breath, the spiritual father of Hanuman, Bheem, and Madhav and He is the incredibly powerful lord of wind (sic)”, Sonam Kapoor wrote in an Instagram post.

“Praana is Vayu, a guiding force of life and intelligence in the universe. All the deity's of Praana, Indra, Shiva, and Kali relate to Vayu. He can breathe life into beings as easily as he can destroy evil. Vayu is said to be heroic, brave, and mesmerizingly beautiful. Thank you for your continued wishes and blessings for Vayu and his family (sic)”, it further read.

The duo became parents on August 20 when they welcomed a newborn boy and she announced the same on her Instagram story.

“The statement by Sonam and Anand read, "On 20.08.2022, we welcomed our beautiful baby boy with bowed heads and hearts. Thank you to all of the doctors, nurses, friends, and family who have supported us on this journey. It's only the beginning but we know our lives are forever changed. - Sonam and Anand (sic)”, she informed on an Instagram post.

It needs mention here that Sonam was last seen in The Zoya Factor with Dulquer Salmaan. In the film, the actress played the role of Zoya Singh Solanki.

Sonam will next be seen in Blind, with Purad Kohli, Vinay Pathak, and Lillete Dubey. When it comes to Blind, is a remake of the 2011 Korean film of the same name.