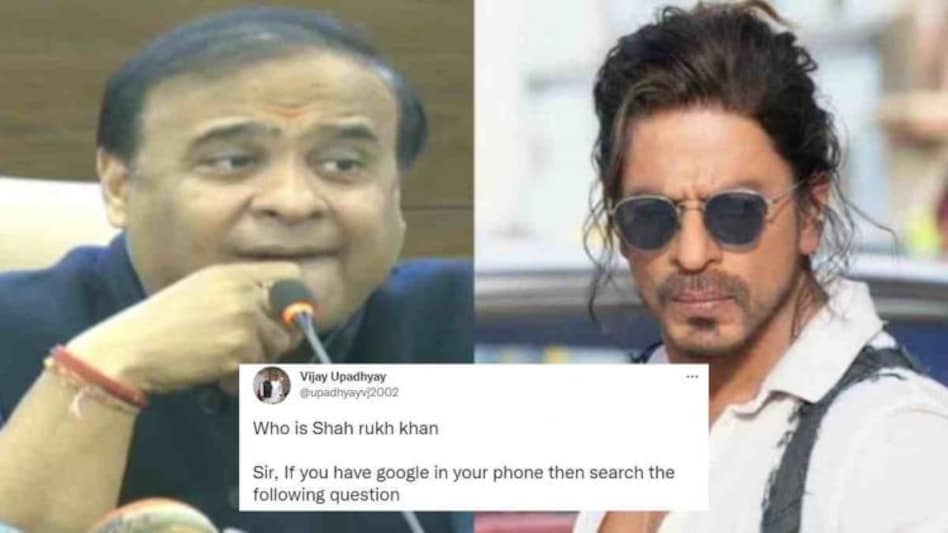 "Who is Shah Rukh Khan?" has become a Twitter trend following Assam Chief Minister's scathing statement about not knowing anything about the global star as it has garnered a lot of attention on January 22.

"If u don't Know ,Then You need to know. "Who is Shah Rukh Khan" #SRK?? #Pathaan #Assam #assamcm @iamsrk @himantabiswa #AskSRK", another wrote in a Twitter post.

If u don't Know ,Then You need to know.
"Who is Shah Rukh Khan"#SRK𓃵 #Pathaan #Assam #assamcm@iamsrk @himantabiswa #AskSRK pic.twitter.com/QncaoWaGtg

Sir, If you have google in your phone then search the following question", one user wrote in a Twitter post.

Who is Shah rukh khan

Sir, If you have google in your phone then search the following question

1. Biggest movie star
2. Second richest actor in the world
3. Which actor is god of Germany
4. Brand Ambassador of Dubai
5. Most cheritable actor in India#HemantaBiswaSarma #srk pic.twitter.com/7iCg2iOeW6

As a Proud Indian you would know "Who is Shah Rukh Khan"💓 Guys Do Agree...?#ShahRukhKhan #AskSRK pic.twitter.com/KsIcnGVPMQ

In a press meeting while replying to a question on the recent vandalism of Bajrang Dal activists in Narangi in Guwahati, Assam CM said, "Who is Shah Rukh Khan...I don't know anything about Pathaan."

"If someone has done anything wrong let the victims file a case and we shall take action...Shah Rukh Khan did not call me if anything was to worry about," he added.

Assam CM Himanta Biswa Sarma took to Twitter to confirm the same stating that the state government will do all to maintain law and order in the state and that it will enquire about the January 20 incident.

“Bollywood actor Shri @iamsrk called me and we talked today morning at 2 am. He expressed concern about an incident in Guwahati during screening of his film. I assured him that it’s duty of state govt to maintain law & order. We’ll enquire and ensure no such untoward incidents”, the chief minister wrote in his Twitter.