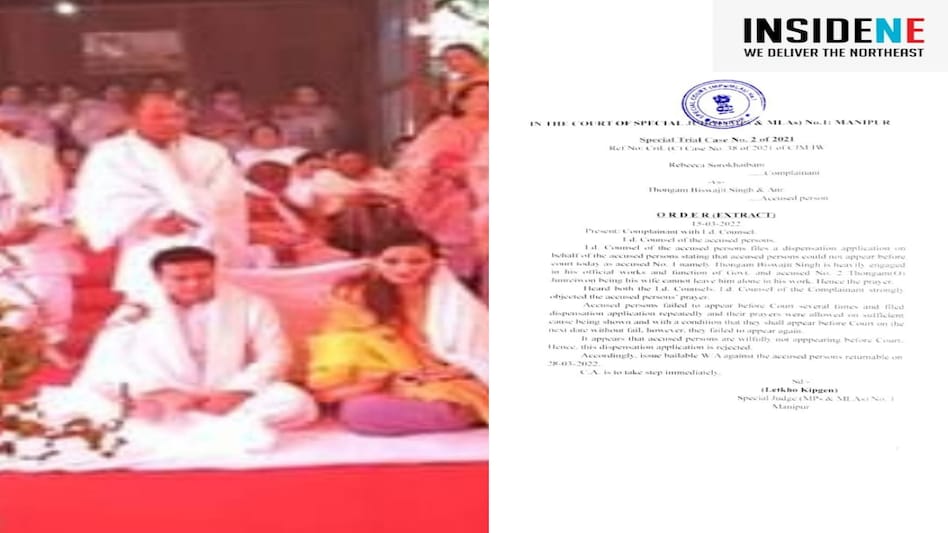 Former Minister Th Bishwajit and his wife Junreiwon Lunghar have been summoned to court several times in connection with Rebecca's ( a lady which Th Bishwajit accepted by his wife- earlier by following regional rituals) Criminal Miscellaneous Case.

Rebecca has filed a complaint with the court under the Protection of Women from Domestic Violence Act of 2005, Section 12.

However, the court recently issues arrest warrant against Minister Th Bishwajit and his wife Junreiwon Lunghar.

Counsel of the Complainant strongly objected to the accused persons' prayer.

Accused persons failed to appear before Court several times and filed dispensation application repeatedly and their prayers were allowed on sufficient cause being shown and with a condition that they shall appear before Court on the next date without fail.

However, they failed to appear again. It appears that accused persons are wilfully not appearing before Court. lenee. this dispensation application is rejected. Accordingly, issue bailable WA against the accused persons returnable on 28-03-2022 C.A. is to take step immediately, the order stated.

Rebecca, the complainant, stated on the complaint that she married minister Th Bishwajit in November 2018 in the form of Keina Katpa (offering of bride to bridegroom under mutual consent) in front of friends, family, and relatives. Bishwajit drove her out of her two shared households, one in Thongju Ningom Thongjao and the other in Gahri Awang Leikai.

She is currently taking refuge at her parental home in Nagamapal Singjubung Leirak. They have been living in a shared household at Thongju since Keina Katpa. Junreiwon, his first wife, was not present because she had eloped with another person during the course of their marriage.

Junreiwon, on the other hand, returned to the shared household in December 2019 after leaving another person.

Junreiwon has been torturing Rebecca psychologically and emotionally since the day he began accusing her of being the source of all negatives and that the marriage was to blame for the death of his nephew, Thongam George.

At the same time, Bishwajit used to say that Rebecca is a possessed woman with an evil spirit, and that all of his family's misfortunes are due to her.

He also accuses her of being the source of his father's illness, claiming that she is possessed by an evil spirit.

Rebecca has been subjected to a great deal of psychological and emotional distress as a result of such remarks and name-calling.

According to Rebecca's complaint, Junreiwon slapped and assaulted the complainant. And, fearing that she would be forced to stay, the complainant invited her cousin to join her.

Junreiwon, on the other hand, insulted her cousin, saying they were shameless people who had come to stay in a shared house.

She had been admitted to the hospital after being assaulted by Bishwajit families and Junreiwon. The complainant's mother even filed a complaint with the Singjamei Police Station.

Bishwajit persuaded the complainant to drop the criminal complaint against his first wife. The complainant was put on medication for about two months after Bishwajit stopped communicating with her.

The complainant mother filed a complaint with the Manipur State Women Commission out of sheer intolerance.

As a result, the complainant took a trip to Shillong with her cousin in November 2019 out of frustration and depression.

Some people posing as police officers arrived at the hotel room where they were staying in Shillong and began filming the complainant having extramarital affairs with other men in a sexually explicit manner.

The videos went viral at social media sites, those men sent by Bishwajit based on the missing report kidnapped the complainant and brought him back to Imphal.

She was taken to Ghari residence of Bishwajit and pressed the complaint to sign papers despite her resistance.