Manipur, the State government has given a 48-hour ultimatum to its employees to exit groups seen to be furthering ‘separatist’ sentiments. The ultimatum was issued on Wednesday, August 10. Amid the ongoing ruckus in Manipur, the State government has given a 48-hour ultimatum to its employees to exit groups seen to be furthering ‘separatist’ sentiments. The ultimatum was issued on Wednesday, August 10.

On August 10, the Manipur Home department, issuing a notice to government employees, urged them to exit groups furthering ‘separatist, anti-national, anti-state, anti-social, communal, and divisive agendas which cause disturbance in existing peaceful social harmony and law and order situation of the state.

Participation in such groups, the Home Department says, ‘may be construed as involvement in activities of such groups/blogging sites which is contravention of Rules 5 and 7 or both of All India Services (Conduct) Rules, 1968 and Rules 5, 9, 11 or all three of Central Civil Services (Conduct) Rules, 1964, and liable for disciplinary action.
This Order comes in the wake of highways being blockaded by an influential student body, bringing economic activity to a crippling halt.

Though yesterday’s notice, undersigned by Special Secretary (Home) H. Gyan Prakash, did not name these groups, it said such ‘formal and informal groups’ are to be found on social media platforms ‘such as WhatsApp, Facebook, and other chat groups.’ 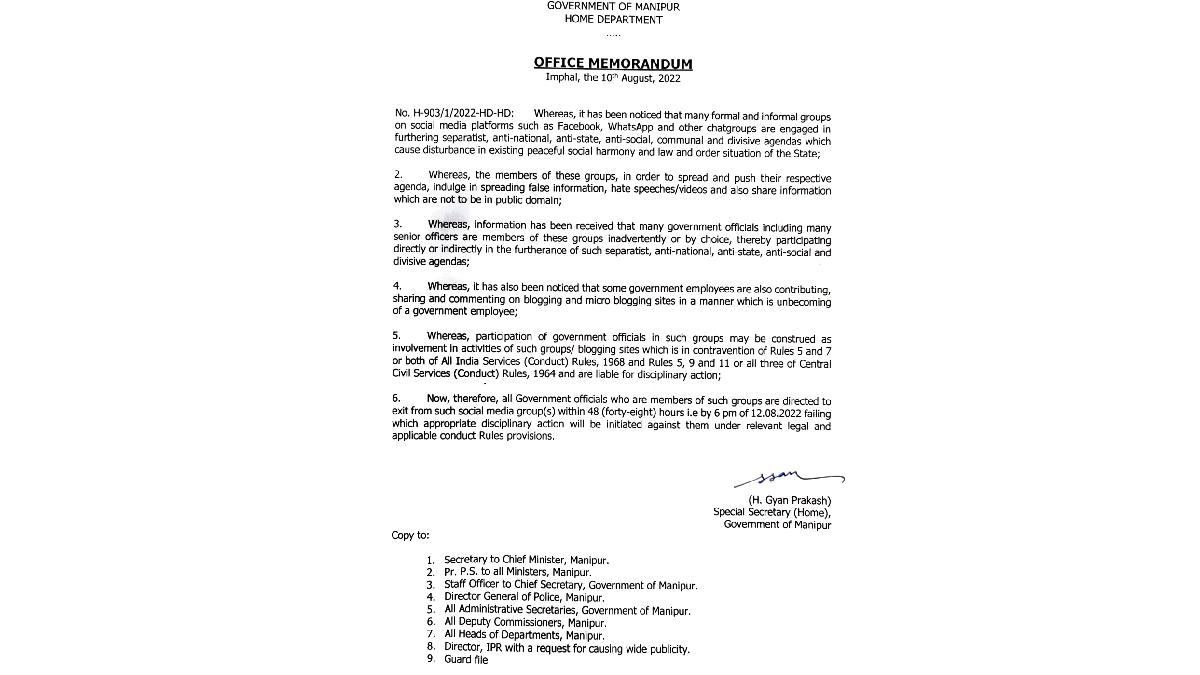 The Home Department believes that ‘many government officials including many senior officers are members of these groups inadvertently or by choice, thereby participating directly or indirectly in the furtherance of such separatist, anti-national, anti-state, anti-social, and divisive agendas.’

All Tribal Students’ Union, Manipur (ATSUM) is peeved at the government for not meeting a long-pending demand.

It has asked for the introduction of Manipur (Hill Areas) Autonomous District Council Bill, 2021. However, the government has introduced the Manipur (hill areas) district council 6th and 7th amendment bills, which is not in line with its demands.

Many of its leaders were arrested amid protests, which caused the agitation to escalate further. The ATSUM officially announced to “suspend” the economic blockade along the national highways in Manipur after the state government’s assurance to release its leaders, but it has not softened its stance on the Bill.