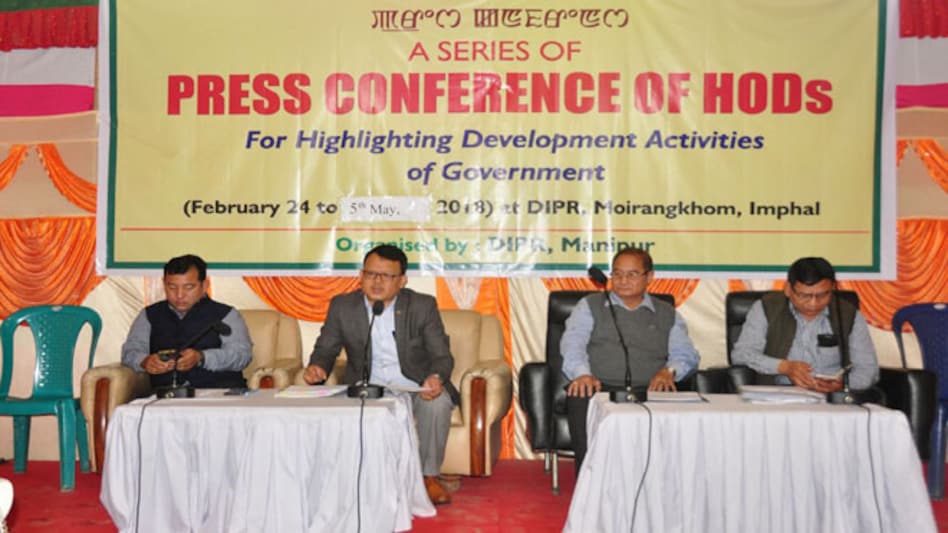 Director of Tourism Department Shri W. Ibohal Singh said that the Tourism Department is giving its priority to promote eco-friendly and sustainable tourism in the State. This was stated by him today at the press conference of HODs organised by DIPR for highlighting the activities and achievements of the Government of Manipur held at DIPR Complex, Moirangkhom, Imphal.

Speaking to the media persons, Shri W. Ibohal Singh said that a good hospitality is a must to promote tourism in the State. The Tourism Department is trying its level best to promote economic growth and provide sustainable livelihood to the people of the State, he added. He stated that the Department has successfully organised various Tourism Festival in grand manner such as Manipur Sangai Festival, Shirui Lily Festival, NorthEast Development Summit, International Polo tournaments etc. He stressed that around 50,000 National and International delegates and exhibitors witnessed the Manipur Sangai Festival 2017. Because of such festivals, there has been rapid increase in tourist flow in 2017-18 in the State. Around 1,58,000 domestic tourists and 3600 foreign tourists were recorded between April 2017- March 2018. The significance of organising various tourism festivals in the State is not just to generate revenue but to build a good relationship and revive the sense of brotherhood with the local people. And tourism festivals have immensely helped in enhancing such relationship, he added.

Highlighting the success of the recently held Shirui Lily Festival 2018, Shri W. Ibohal Singh said that around 10,000 Shirui lily saplings were planted across the Shirui hills during the festival. He said that the government is giving extra effort to conserve and preserve the Manipuri Pony in the State. The Government is developing an exclusive Pony Sanctuary at Heingang area as part of measures to protect and preserve the unique Polo Ponies found in the State. A polo ground with International field dimensions would also be developed in the said area, he added. International Polo Tournaments such as Manipur International Polo Tournament and Manipur Statehood Day Women’s Polo Tournament are being organised to encourage the game of Polo and to preserve the endangered Pony in the State.

Director mentioned that a team from USA would be visiting the State to discuss various issues regarding the protection of Manipuri Pony such as to exchange their knowledge and chalk out plans to preserve Pony in the State.

Mentioning some of the tourism projects in the State, Director said that major tourism projects such a Infrastructure Development of Tourist Destination of Santhei Natural Park, Andro, Infrastructure Development of Tourist Resort at Sendra Hillock, development of Marjing Polo Complex at Heingang and development of Manipur Adventure and Allied Sports Institute Complex(MAASIC), Keirao have been inaugurated in the past one year. Some other projects would be inaugurated within some months, he added. The Thanga-Karang ropeway and Heingang-Cheiraoching ropeway would be constructed soon to attract the tourists to witness the scenic view of Loktak Lake and Imphal city.

Citing some of the awards bagged by the Manipur Tourism Department, Shri W. Ibohal Singh said that the Department won the Best Cultural Destination Award at East India Travel Awards 2017 and also bagged the TODAY’S TRAVELLER AWARD 2017 for Best State for Showcasing Art and Culture under Domestic Tourism Category.