On the other hand, earlier, a vehicle bearing an Assam registration number was torched by unknown miscreants on November 22 in the Jhalupara area in Shillong, Meghalaya. 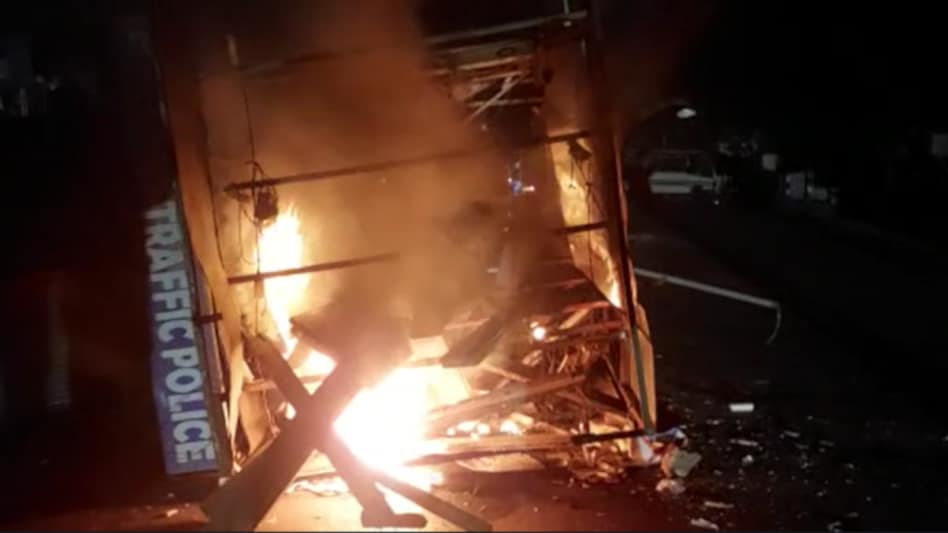 Tension continues to grip the capital city of Meghalaya after unknown miscreants torched a traffic booth in the Shillong Civil Hospital junction.

As per reports, a city bus bearing Meghalaya registration was also attacked by miscreants with the intention of burning it down.

This comes after a series of protests started to erupt post-Mukroh firing incident on November 22 which claimed five lives in the state of Meghalaya.

As per reports from the ground, after the protest, the NGOs had an argument with the police which subsequently led to fighting from both parties.

Notably, the police resorted to tear gas which angered the mob, following which miscreants burned down a police traffic booth and damaged a city bus.

On the other hand, a vehicle bearing an Assam registration number was torched by unknown miscreants on November 22 in the Jhalupara area in Shillong, Meghalaya as the situation continues to remain volatile following the firing incident along the Assam-Meghalaya border that claimed 6 lives.

A vehicle bearing registration number AS 01 DK 5958 was torched by unknown miscreants on November 22 in  Jhalupara, GS Road, in Shillong city leading to a chaotic situation in the area as the driver of the vehicle made a run for his life.

“We were stopped by the police who said that no vehicle is being allowed to travel to Meghalaya due to the tense situation. While we were looking for an alternate route to return back, suddenly a strong mob of around 20-30 men reached here and we moved away from our vehicle. The mob torched the vehicle while we stood here standing helpless,” said the driver of the torched vehicle.

Meanwhile, the Hynniewtrep Integrated Territorial Organisation (HITO) has decided to observe Red Flag Day on November 26 as a mark of protest against the shooting by Assam Police which led to the death of five villagers in West Jaintia Hills.