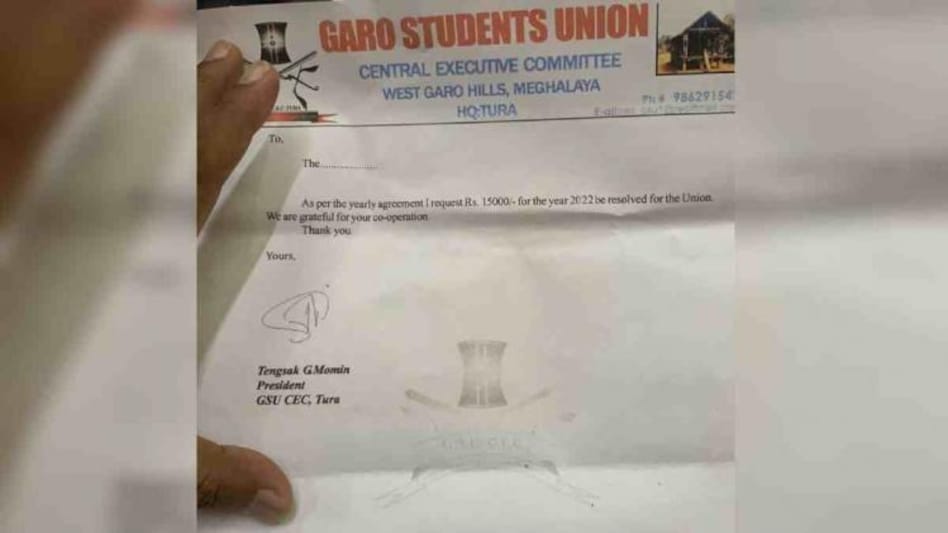 As the crackdown on the illegal raising of food prices in Garo Hills continues, the Tura Police seized a letter from the Garo Students Union (GSU) demanding money from traders as part of an annual agreement to pay to the student body.

The letter which has the signature of the GSU president Tengsak G Momin has been alleged to be a case of extortion racket which has been going on for years.

Tura Police display the letter to the media on Monday afternoon, the copy of the letter which was given to the trader is in the letter pad of the GSU and signed under the name of Tengsak G Momin.

“As per the yearly agreement, I request Rs 15000/- for the year 2022 be resolved for the union. We are grateful for your cooperation and have the name of the GSU president with a sign”, the letter mentioned.

“This is another form of extortion taking place in Tura markets where businessmen and shopkeepers are forced to pay up and is the main reason why common people are being forced to buy food items at higher costs,” said West Garo Hills SP Vivekanand Singh Rathore.

The police chief said that the law will come down heavily on anyone indulging in extortion to ensure the people of Tura obtain the right price for their food and other items.

While the police chief has not ruled out the involvement of others in this racket, at the moment prima facie evidence is on the GGSU group led by Tengsak G Momin, he said.

The GSU presently has two factions- one side backing the Zikku Balgra Marak faction and the other Tengsak G Momin faction. The division occurred after Tengsak Momin refused to step down from the president’s post and continued to hold on to the name and did not hold elections.

The rumour against Tengsak G Momin is that he is no longer a student nor a member of any college or university and has refused to hold student elections.