People soaked in the celebration as Jeremy Lalrinnunga, Mizoram's golden boy returned home on August 8 with a rousing reception 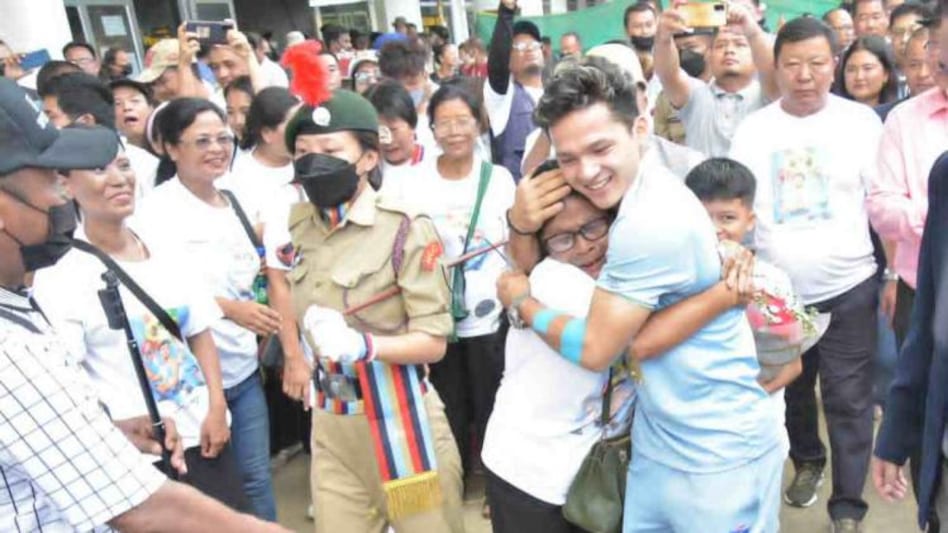 People soaked in the celebration as Jeremy Lalrinnunga, Mizoram's golden boy returned home on August 8 with a rousing reception. A crowd had swelled at Lengpui Airport and hundreds, if not thousands later took to the streets to catch a glimpse of Jeremy after his exploits in Birmingham.

Lalrinnunga, all of 19 years old, had set the tone for India’s campaign at Commonwealth Games 2022 after he nabbed a Gold medal in the men's 67kg weightlifting.

Upon his arrival at Lengpui Airport, Aizawl, he was given a formal state reception normally reserved for the visiting VVIPs from outside the state.

Jeremy expressed his gratitude for being felicitated with such a warm welcome.

Outside the venue of the official reception, a large crowd also waited for a peek of the state's new sensation.

On his way back to Aizawl, his motorcade was escorted by more than 200 bikers from Aizawl Thunder, a group of Royal Enfield riders.

Jeremy is expected to meet Chief Minister Zoramthanga on August 9.

He will leave Aizawl on August 10 to meet the Chief of Army Staff.

Jeremy achieved a new Commonwealth Games record of 300kg overall in his debut outing (140kg snatch and 160kg in clean and jerk).

He was disheartened after missing out on qualifying for Tokyo Olympics last year as he had picked up a knee injury during the Asian qualifying event wherein he finished a disappointing 8th. However, he has bounced back in an emphatic fashion.