AIZAWL: Mizoram Chief Minister Zoramthanga has requested the Centre to change the current Chief Secretary (CS) of the state, Renu Sharma and that to appoint a Mizo-speaking CS for the state.

According to CM Zoramthanga while none of his cabinet ministers understand Hindi language and some of them even have problem with English language, the current Renu Sharma has no knowledge of working standard Mizo language, therefore such CS will never be effective and efficient for the state.

In this regard, CM Zoramthanga wrote a letter to Union Home Minister Amit Shah yesterday.

"The Mizo people by and large,  generally do not understand Hindi , and none of my Cabinet Ministers understands Hindi. Some of them even have problem with English language. With such background, a Chief Secretary without the knowledge of a working standard Mizo language will never be an effective and efficient Chief Secretary,"The Chief Minister wrote.

The letter further read: "Due to this fact the Government of India never posted a Chief Secretary who does not know the working standard of Mizo language since the creation of the state of Mizoram. Whether it is the UPA Government or the NDA Government at the Centre, this has been a practice since the creation of Mizoram State. It is a well known fact that in other States of India, a Chief Secretary, who does not know even the basic working language of the respective state is never posted at all." 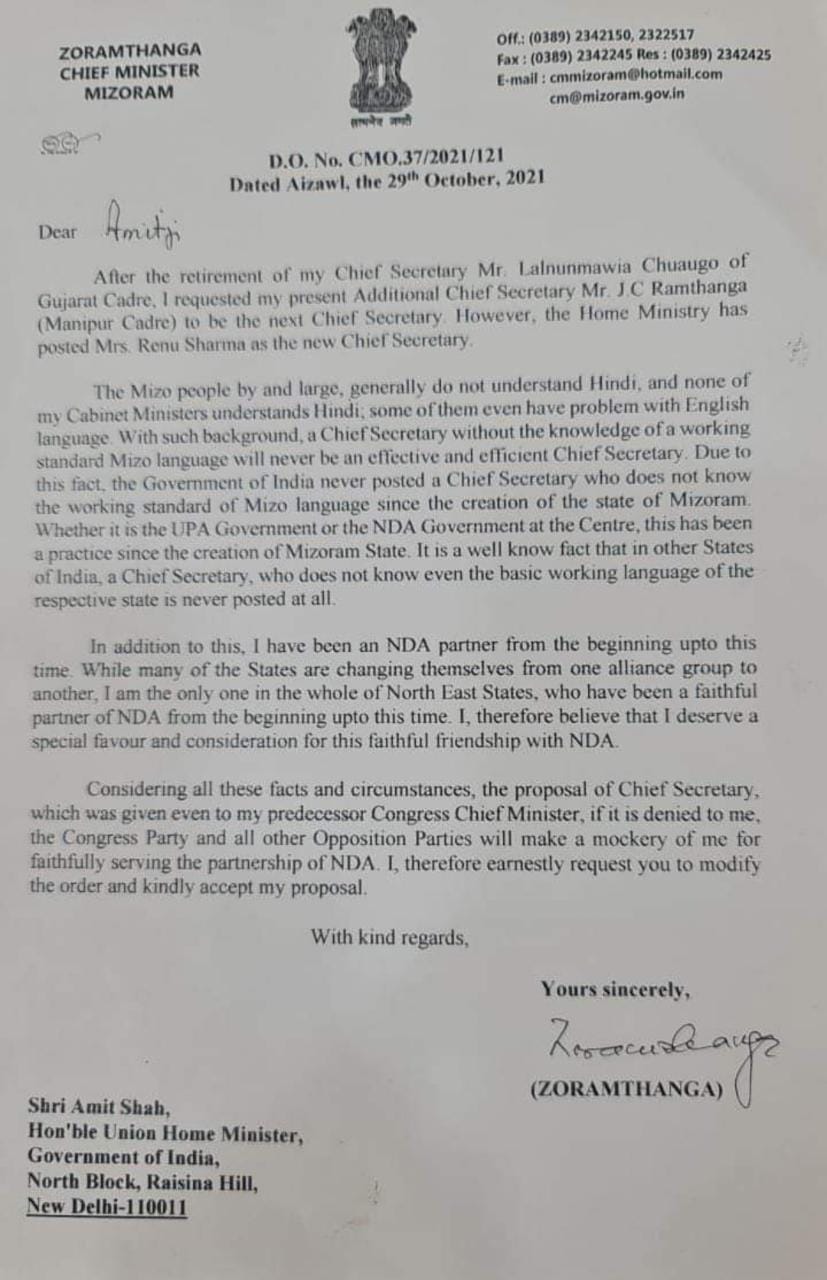 CM Zoramthanga said, "After the retirement of my Chief Secretary Mr Lalnunmawia Chuaugo of Gujarat Cadre, I requested my present Additional Chief Secretary JC Ramthanga (Manipur Cadre) to be the next CS. However, the Home Ministry has posted Renu Sharma as the new Chief Secretary."

He further cited that as he has been a faithful partner of NDA from the beginning upto this time, therefore he believes that he deserve a special favour and consideration for this faithful friendship with NDA.

"Considering all these facts and circumstances, the proposal of Chief Secretary, which was given even to my predecessor Congress Chief Minister, if it is denied to me. the Congress Party and all other Opposition Parties will make a mockery of me for faithfully serving the partnership of NDA. I, therefore earnestly request you to modify  the order and kindly accept my proposal," he added.