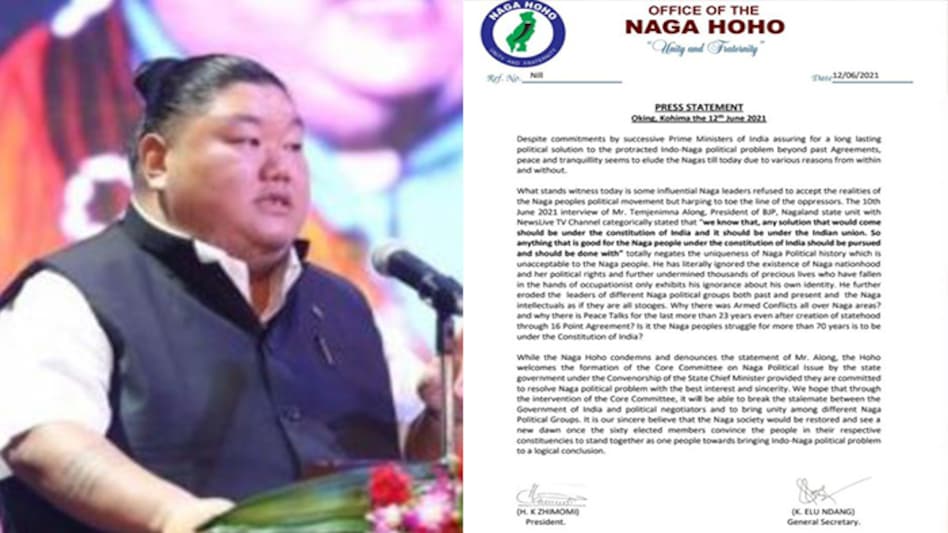 KOHIMA: The Naga Hoho, an apex tribal body has slammed Nagaland's BJP president for remarking in a televised interview that the Naga political solution that would come should be under the constitution of India and it should be under the Indian union.

The Naga Hoho, issuing a statement, said that "some influential Naga leaders refused to accept the realities of the Naga peoples political movement but harping to toe the line of the oppressors. The 10th June 2021 interview of Temjenimna Along, President of BJP, Nagaland state unit with Newslive TV Channel categorically stated that 'we know that, any solution that would come should be under the constitution of India and it should be under the Indian union. So anything that is good for the Naga people under the constitution of India should be pursued and should be done with" totally negates the uniqueness of Naga Political history which is unacceptable to the Naga people.

The Hoho has accused Along of "ignoring the existence of Naga nationhood and her political rights."

According to the Naga Hoho, he has also "undermined thousands of precious lives who have fallen in the hands of occupationist."

"He further eroded the leaders of different Naga political groups both past and present and the Naga intellectuals as if they are all stooges. Why there was Armed Conflicts all over Naga areas? And why there are Peace Talks for the last more than 23 years even after the creation of statehood through 16 Point Agreement? Is it the Naga people's struggle for more than 70 years is to be under the Constitution of India?," the Naga Hoho questioned.

While condemning and denouncing the statement made by Along, the Hoho also welcomed the formation of the Core Committee on Naga Political Issue by the state government under the Convenorship of the State Chief Minister "provided they are committed to resolving Naga political problem with the best interest and sincerity."

"Despite commitments by successive Prime Ministers of India assuring for a long-lasting political solution to the protracted Indo-Naga political problem beyond past Agreements, peace and tranquillity seems to elude the Nagas till today due to various reasons from within and without," the Naga Hoho said, adding, "We hope that through the intervention of the Core Committee, it will be able to break the stalemate between the Government of India and political negotiators and to bring unity among different Naga Political Groups,."