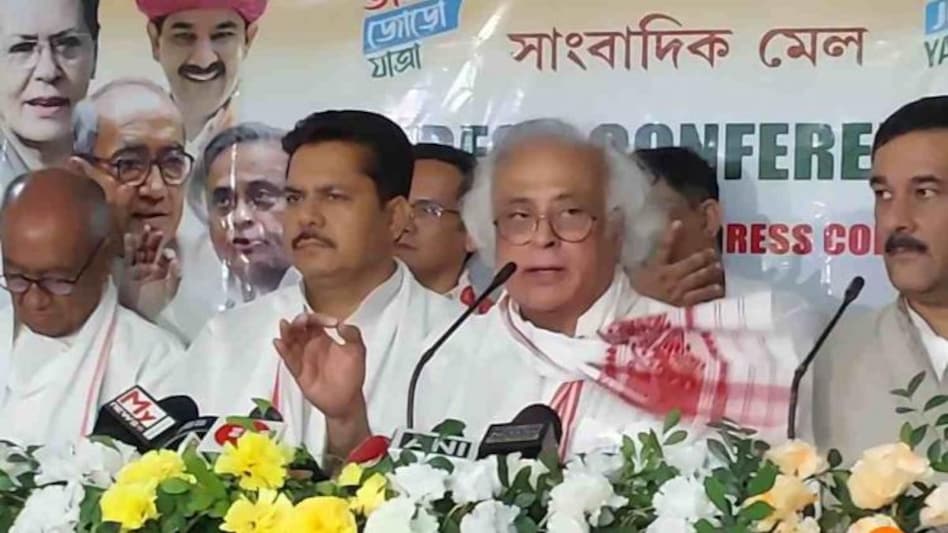 Senior Congress leader Jairam Ramesh on Friday said that Bharat Jodo Yatra is a transformation for our politics and it's a kind of booster dose.

''You all have taken booster dose, isn’t it? In the same way, the Bharat Jodo Yatra is a booster dose for our party,'' he said while addressing a press conference in Guwahati.

''Two types of people leave the Congress and the first category includes those who have got everything from the party and the second category includes such people need washing machine because they have stain and want to become clean as my Kurta is,'' he said.

Speaking further Ramesh also said that in a bid to make opposition strong, Congress has to be strong.

''If Congress is strong then the opposition will be strong...opposition's strength is another thing but this we are doing to pump a new life into Congress,'' he said.

While speaking during the same press conference, another Congress Senior leader Digvijay Singh slammed the BJP-led Central government and asserted, ''Rich getting richer and poor getting poorer day by day.''

Singh further said that he and his party are thankful to Rahul Gandhi for this Bharat Jodo Yatra.

Responding to the questions of MLAs voting for opposition candidates in the last presidential election and Rajya Sabha elections, Singh said, ''MLAs will come and go, we have not to do with this''.

He further added that our aim is to complete Bharat Jodo Yatra within 5 months and those who want to walk away from it they can do so.

So far we have completed 163 km and now we are in Kollam in Kerala. Each day we walk 21 km but Rahul Gandhi wants to walk 25 kilometers because he is young and full of energy but others can't.

He further said that Assam CM asks why you want Bharat Jodo Yatra knowing the fact that India is not being divided and said, ''We want to tell Assam CM that India is on the verge of breaking down due to economic inequality, continuously rising inflation, unemployment, and GST on foodstuffs.

''You all are aware of the fact that the entire nation’s stake is being sold to two capitalists watch all and recently your Lokpriya Gopinath Bordoloi Airport has been converted Adani airport,'' he said.

''The second reason for the same is social polarization as divisive ideology are getting encouragement,'' he added.

Giving a third reason, Ramesh alleged that the constitutional bodies are being misused and state’s rights are also being snatched away.

''Presently in India, Prime Minister’s Office is ruling the country and in the PMO, the Prime Minister sits. So, the Assam Chief Minister should understand these three reasons. He was a part of us and called us Tukde Tukde Gang'' he added.