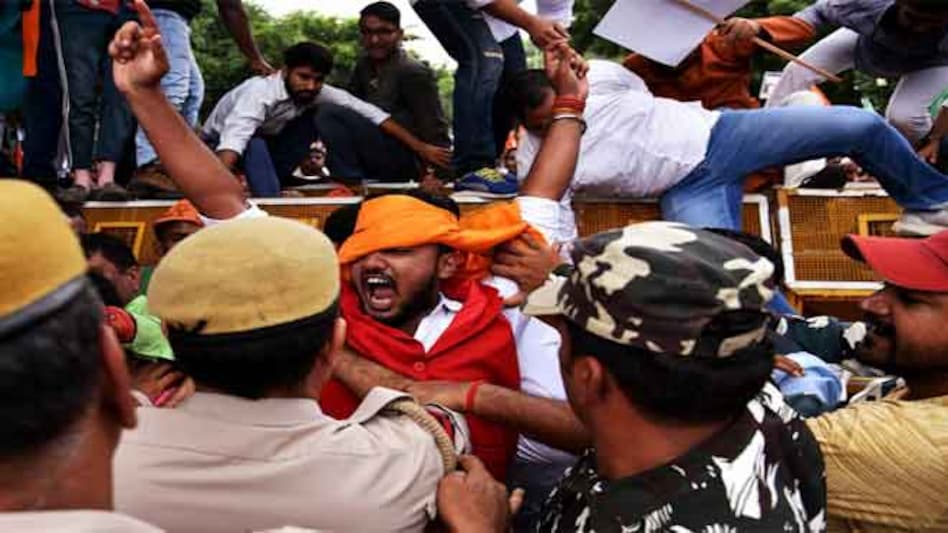 The Bharatiya Janata Party’s (BJP) Purvanchal Morcha has staged a massive protest outside the residence of Delhi CM Arvind Kejriwal following a comment on BJP leader Manoj Tiwari over the National Register of Citizens (NRC).

Kejriwal on Wednesday took a dig at the BJP leader after the publication of Assam NRC. Earlier, Tiwari said that NRC should be implemented in Delhi as the national capital had become ‘dangerous’ due to the presence of illegal immigrants including Bangladeshis and Rohingyas.

Commenting over his NRC remark, the Delhi CM said that if the NRC was implemented in Delhi, the BJP leader will be the first one to leave.

The protestors were seen shouting slogans outside Kejriwal’s residence. The enraged Purvanchalis were also seen climbing the barricades. Police had to disperse the mob using water cannons.

Kejriwal’s comment was heavily criticized by BJP leaders. Manoj Tiwari, in response to his comment, said that the Delhi CM had shown his true colors. He added that the AAP Chief wanted Purvanchalis, who hail from Uttar Pradesh and Bihar, out of the national capital.

Calling Kejriwal’s comment ‘disgraceful’, Tiwari further said that the Delhi CM’s comment has conveyed the message that people outside Delhi have no right to live in the union territory.

The Assam NRC was published on August 31 and controversy surrounding the final result has not yet stopped. Its aim was to free the northeastern state from illegal immigrants from Bangladesh and sealing the rights of genuine citizens. However, many genuine citizens were reported to be left out of the final list.