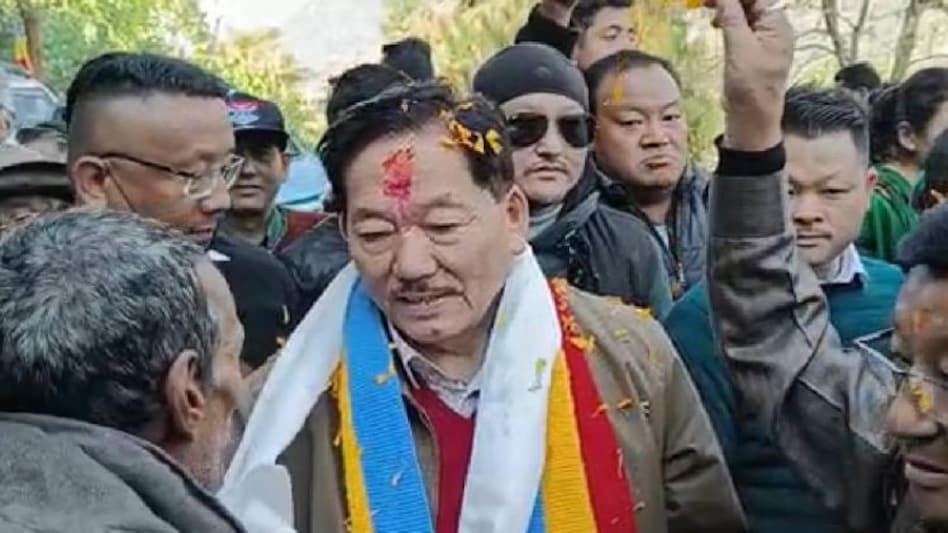 Even though election is 15 to 16 months away yet the SDF Chief Pawan Chamling said during their campaign that begun on November 28, "Sikkim is unsafe under the rule of Sikkim Krantikari Morcha (SKM) led government and there are violations of article 371 F. They have failed in all aspect as well as deliver the promises they made.Hence we have started our campaign and also from today we will visit various parts of the state and it is can be considered as election campaign for 2024".

Sikkim Rajya Manch president and former MLA Rup Narayan Chamling arrives with his supporters to participate in the ‘Save Sikkim’ campaign launched by former Chief Minister of Sikkim and SDF president Pawan Chamling at Chujachen constituency on Monday, November 27.

RN Chamling is brother of Pawan Chamling who became MLA of Yangang-Ranagang with his own party Sikkim Rajya Manch in the year 2014. He became MLA after winning the assembly by-poll.

Former CM Pawan Chamling was given a rousing reception by SDF workers in various parts of the state while on his way to Rongli constituency to open a block level SDF party office there.

RN Rai shared "I am here to safeguard Sikkim not to support my brother. In the past there was an ideology clash and I stood against him even though he was my brother. But now Sikkim is under threat under new government and I love Sikkim and Sikkim should be of Sikkimese people so I came here to extend my support. He also made it clear that we are not merging our party we have just extended our support".

Pawan Chamling later while addressing the supporters after inaugurating the constituency level party office said "Sikkim is in crisis and Sikkim Rajya Manch and it's chief RN Chamling has also extended support and now we will work together. Even though he is my brother and blood relation is different but we have ideological differences and today he has extended his support so now we will work together for the welfare of Sikkimese people and Sikkim.

Pawan Chamling also said "At present Sikkim is divided into two blocks that is Sikkim Mahshaune and Sikkim Bachauane (Sikkim Destroyer and Sikkim Saver). People are in dilemma and they should understand that we should all be united and work together to save Sikkim and people should make a choice this time. Now we have no place for dalals (Brokers). SDF is now a purified party as many opportunists and dalals have left the party and joined SKM".

Pawan Chamling further added, "Last 4 years was hard for people. But now the wait is only for one more year now as the elections are scheduled for the next year. He also said, "You yourself choose your candidate from next time and make him or her win then I will owe everything, give me one chance I will come up with the schemes which will last for ages and provide jobs to our children and youth of the state".