Senior Congress leaders including Sudip Roy Barman, Asish Kumar Saha, Gopal Roy and Szarita Laitphlang were present in the joining program occasion on the celebration of birthday of Sachidananda Lal Singh, the first Chief Minister of Tripura who was also from the grand old party. 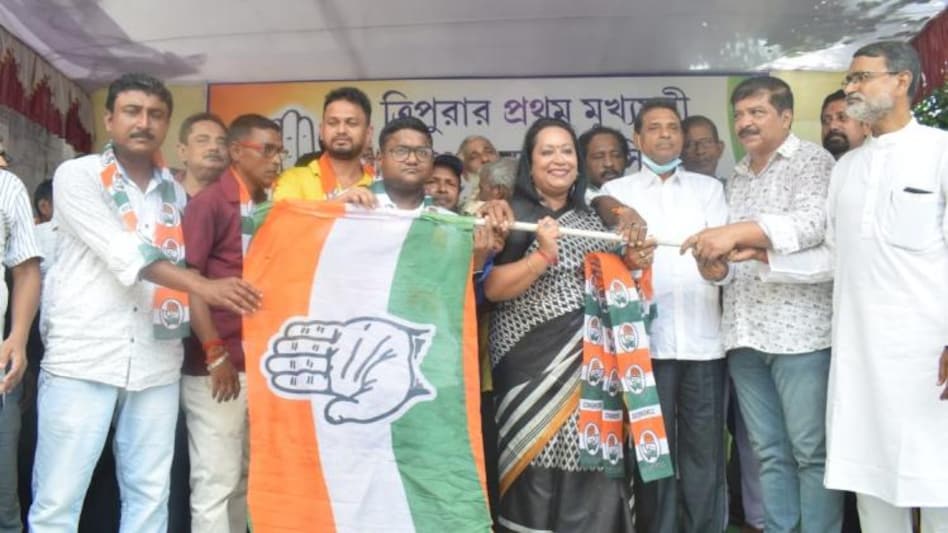 Six months ahead of the crucial assembly election in Tripura and in a big jolt to the Trinamool Congress which claimed to be the main opposition in the BJP ruled state, hundreds of TMC supporters and leaders in and around capital Agartala joined the Congress during a joining program at the Rajiv Bhavan here on Sunday, August 7.

AICC incharge for Tripura, Szarita Laitphlang, claimed that more than 2517 people from various parties including the ruling BJP, beside opposition CPIM and mainly from Mamata Banerjee’s Trinamool had joined Congress on the day as they realised the Congress is the main party which is fighting against the BJP and is going to form government in Tripura in coming days.

She added, “Because they are bringing up uncomfortable subjects such unemployment, price increases, or the economy against the party in power, the BJP is using the ED or CBI to unfairly target the leadership of the Congress. The helm of affairs has just got out of the hands and each day every person of this nation is realising it. In fact the Modi government is targeting the opposition and to stifle the voice of the opposition that  raises the voice of the voiceless but if you try to stifle them that doesn’t work in that way. So people of this country are becoming more and more aware about what kind of government the BJP is running in this country.”

Senior Congress leaders including Sudip Roy Barman, Asish Kumar Saha, Gopal Roy and Szarita Laitphlang were present in the joining program occasion on the celebration of birthday of Sachidananda Lal Singh, the first Chief Minister of Tripura who was also from the grand old party.

All those who joined the Congress today are from Agartala and it’s outskirts area including Khayerpur, Barjala, Bordwali and Pratapghar.

Addressing the gathering Congress MLA Sudip Roy Barman alleged BJP of misusing various central investigating agencies against the Congress leadership while many other parties like TMC and Aam Aadmi Party which from outside pretends to be against Modi are actually helping him from inside and acting as B-team of BJP.

He claimed that as Congress is the main party that is actually fighting against the BJP and for the people of the country so Congress leaders are being targeted by Modi but on the contrary some of the other parties are indirectly helping the BJP through they publicly do not directly support BJP but their actual activities are to weaken Congress.

Speaking about his joining the BJP before 2018 assembly election Roy Barman said, “To oust the 25 years misrule of Left Front government in Tripura we went to BJP but soon realised that we had changed the thieves but unfortunately replaced them with the dacoit.”

Meantime, Baptu Chakraborty a senior TMC youth leader who also joined the Congress today said, “In order to oust the ruling BJP from Tripura, Congress is the main platform and under the leadership of Rahul Gandhi and Priyanka Gandhi in every state Congress is fighting against the BJP across the nation. Congress is the biggest and most powerful party against BJP and so I have today joined Congress to oust the ruling BJP from Tripura and in 2023 form government here under the leadership of Congress.”

He added, “Though TMC claims to be against the BJP, their boycott of the vice president poll has shown that they are in fact indirectly supporting the BJP. So I think TMC is the B team of BJP and that is why today I joined Congress.”

During the last two weeks, Congress has been organizing half a dozen joining program across the state and which is a matter of worry for the ruling BJP which in fact last week tried to stop one such program at Charilam and was targeted by the police and in which few of its supporters were injured.