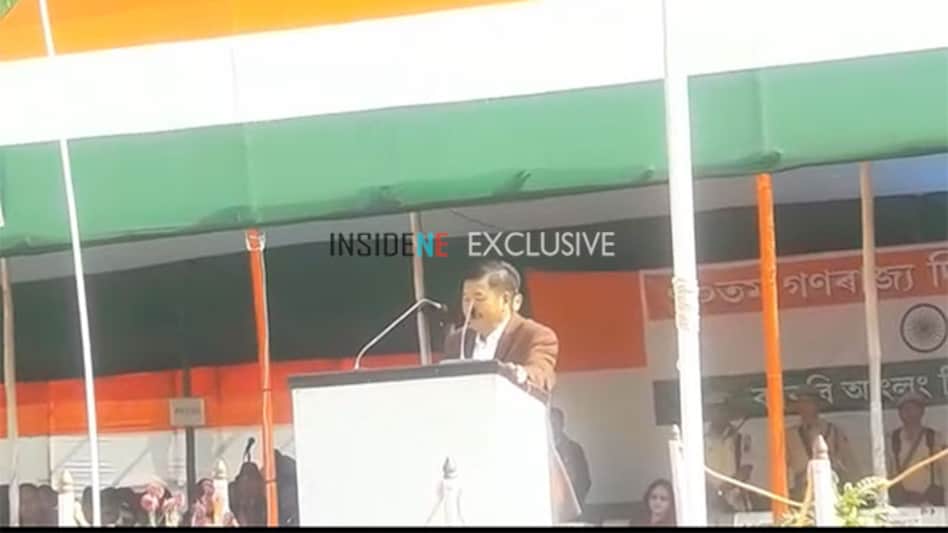 We will continue to press for the implementation of Article 244A of the Constitution for the creation of Autonomous State of Karbi Anglong and Dima Hasao": KAAC CEM Tuliram Ronghang.

The 70th Republic Day was celebrated with great fervour and excitement across all blocks in the hill district of Karbi Anglong despite the 12-hour shutdown called by militant groups of the region.

The day in Diphu was held at Diphu Government Boys’ HS School playground from early morning with hoisting of national flags at all government offices, buildings and educational institutions. A procession of school students of Diphu town to the parade ground for the ceremonial function was held from 7:40 a.m. This was followed by floral tribute to Mahatma Gandhi and Swahid Arpan at Gandhi Park. The unfurling of the national flag was done by KAAC CEM Tuliram Ronghang in presence of DC Mukul Saikia with whom they made inspection of parade contingent before displaying the parade.

KAAC CEM Ronghang said: "We celebrate the 70th Republic Day commemorating the day from which we became a Sovereign Democratic Republic. We solemnly remember all the freedom fighters,  who since more than 200 years ago began their struggle so that we can be free from foreign rule. It was because of their struggle and sacrifices that we are now able to live without fear. India has come a long way since Independence. Today we are not only the largest democratic country in the world, but one of the fastest growing economies. The Government is ceaselessly working to bring development in every field.”

“In Karbi Anglong, we are also putting every effort to bring development in all fields, to every nook and corner. In recent months, we, along with all officers, made visits to the remotest parts in Karbi Anglong, the first ever since Independence and since the formation of the Autonomous Council. That is our first step to bring development to the most remote areas. We are putting great emphasis on the development of road and communication infrastructure. We are already making plans to connect all the towns and villages by road, and provide essential facilities like health centres, education, livelihood assistance, etc”, in regards to facilitating development in the region.

The CEM also laid emphasis on the need to boost tourism in order to develop the economy. “Tourism has the potential to boost employment. Therefore, we are undertaking major tourism development schemes both in Karbi Anglong and in West Karbi Anglong districts. With a view to preserve ecology, we are developing Eco-parks in several parts of Karbi Anglong. Yesterday, we had the honor to have Hon'ble Minister Dr. Himanta Biswa Sarma inaugurate several development schemes including the Arboretum-Cum-Craft Centre in Matipung”, he said.

“Sports development is in our focus always. Today, we boast of having one of the best sports stadiums in North East India. The KASA Stadium is now already hosting matches involving international sports teams. We have also begun mini-stadium construction in all the 26 Autonomous Council constituencies”, said the CEM in regards to developing sports infrastructure in the region.

He also acknowledged the concerns of the people, especially tribal and indigenous people. “Rest assured that we are fully committed to protect their rights. We are putting every effort to fulfil the aspirations of the people of Karbi Anglong. We will continue to press for the implementation of Article 244A of the Constitution for the creation of Autonomous State of Karbi Anglong and Dima Hasao.”

“Let us take inspiration from the freedom fighters of our country, let us also work selflessly for development and for the fulfilment of the people's aspirations.”

Later, fruits were distributed to patients of Diphu Civil Hospital (DCH) also visited and interacted with the inmates of District Jail, Diphu and distributed snacks to them along with his colleagues.