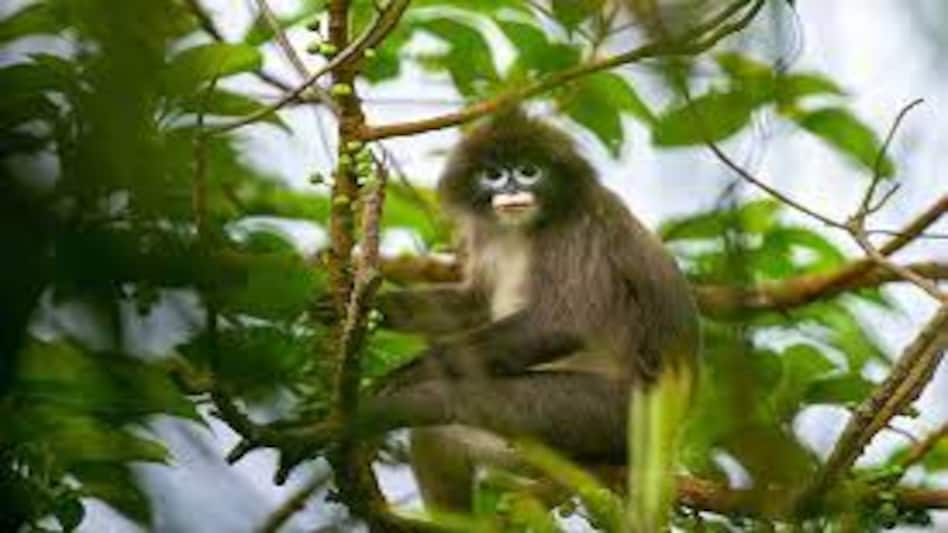 AGARTALA: The population of bespectacle monkey or popularyly known as the ‘Chasma Bandar’ is rising rapidly in Tripura despite the loss of habitat.

These shy, agile, deep forest dwellers - which happen to be the Phayre's leaf monkey- are now threatened with extinction as humans are increasingly encroaching on their natural habitat.

According to International Union for Conservation of Nature (IUCN), Phayre's leaf monkey is listed as endangered and its population is estimated to have more than halved over the last three generations (36 years, given a monkey generation length of 12 years), due to a combination of habitat loss and hunting. In India, it is a schedule 1 species under the Wildlife Protection Act, 1972.

The leaf monkey derives its local name from the chalk-white patch around its black eyes, close to the bridge of its nose. The primates are general tree top dwellers and hardly descend even to drink water. They are named after Sir Arthur Purves Phayre, a British Indian Army officer who discovered the species. They prefer to collect water from dew and rain drenched leaves and survives on fruits, flowers and leaves. When surprised they sound a guttural alarm. The only other sound they make is a kind of squeal.

The monkey which is also the state animal is spotted in north eastern states of Tripura, parts of Assam and Mizoram, neighbouring Chittagong Hill Tracts of Bangladesh, southwestern China, parts of Southeast Asia including Myanmar.

Even as the primate is dwindling in numbers elsewhere, their numbers are rising in Tripura. We have noticed about a two percent rise of the Phary's langur in Tripura.

Interestingly, the monkey, which is folivore also has in recent years developed a habit of thriving on rubber leaves. Tripura has a large number of rubber plantations. The areas under natural forest are shrinking gradually due to human encroachment and the monkeys, which move in herds, often raid horticultural gardens and even kitchen gardens for jackfruits, drumsticks, carrots and other vegetables. They also changed their nature of eating due to habitat loss and developed the habit of eating rubber leaves and its twigs.

As per the 2015 and 2017 reports of the Forest Survey of India, the total forest and tree cover of the state was 8,044 square kilometres and 7,726 square kilometres, respectively. The Forest Report of Tripura conducted in 2017 showed that a total decrease of 164 square kilometres in the state's forest cover could be attributed to developmental activities, harvesting of mature rubber trees, and shifting agricultural practices. Debnath said, Though the ecology of the monkey was affected due to shrinkage of areas under natural forest, rubber cultivation etc., the primate has adapted to the changes and developed a habit of thriving in adverse situation.

Assamese Cinema can beat Bollywood with its unique Contents: ‘The Horse From Heaven’ Director

ENPO to abstain from all election campaigns, renews demand for 'Frontier Nagaland'
advertisement