After resigning from NCP and as MLA, Saleng told reporters that the MDA government has created a lot of anti-incumbency. 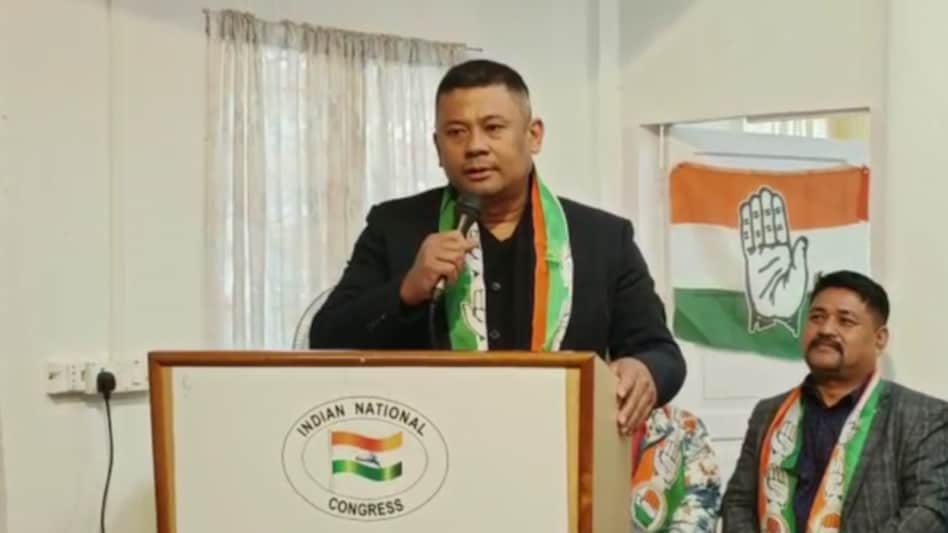 The Nationalist Congress Party (NCP) State President and Gambegre MLA Saleng A Sangma, on January 23 resigned as a member of the Meghalaya Legislative Assembly and joined the Congress ahead of the upcoming Assembly Election.

On Monday afternoon, Saleng tendered his resignation letter to the Commissioner and Secretary Andrew Simons at the Assembly Secretariat.

The NCP is one of the six political parties supporting the National People's Party (NPP)-led Meghalaya Democratic Alliance (MDA) government.

After resigning from NCP and as MLA, Saleng told reporters that the MDA government has created a lot of anti-incumbency.

Saleng also slammed the NCP for not being serious and said, "I cannot ride along them because my objective is to change and do some kind of reformation to the people.
To bring about changes, I need serious players,  I need a bigger platform. Now with NCP, it seems like I am stuck, I just cannot spread my wings. So that is the reason why I am resigning from the NCP and as an NCP MLA."

When asked about his decision to join the Congress at a time when all its sitting legislators have deserted the party to join other political parties, the Gambegre legislator said the Congress will give him a bigger platform to serve the people.

"Everybody has left Congress but I am going back. Somebody may be thinking I am a fool or an idiot but it will give a bigger platform than the NCP that is why I am choosing (Congress) as my whole objective is for the people only. I want to do something for the people and that is why I didn't get a bigger platform, so at least with Congress, there will be 'we' actually not 'I' anymore," he said.

He further justified by saying "Right now, with NCP I am totally alone so with "I" I cannot do especially in a democracy. We need a team so that is why at least I will have a team in Congress and in that we can do something for the people of Meghalaya."

Saleng further claimed that Congress still has its vote bank in the Garo Hills region.

It may be mentioned, 19 legislators have so far resigned ahead of the February 27 assembly elections reducing the strength of the House from 60 to 41.